This week I will tell you about my connection to Royal Doulton Canton, which I call my "good" china. When I was a Senior in college my grandmother told me to pick out a "good" china pattern, so she wouldn't just be buying my "junk" for birthdays and Christmas. I went to Wagoner's Jewelry Store in my hometown and just fell in love with this pattern. I've always been a pink loving, girly-girl and I didn't have to think about tablecloths or wallpaper or would my husband like it. 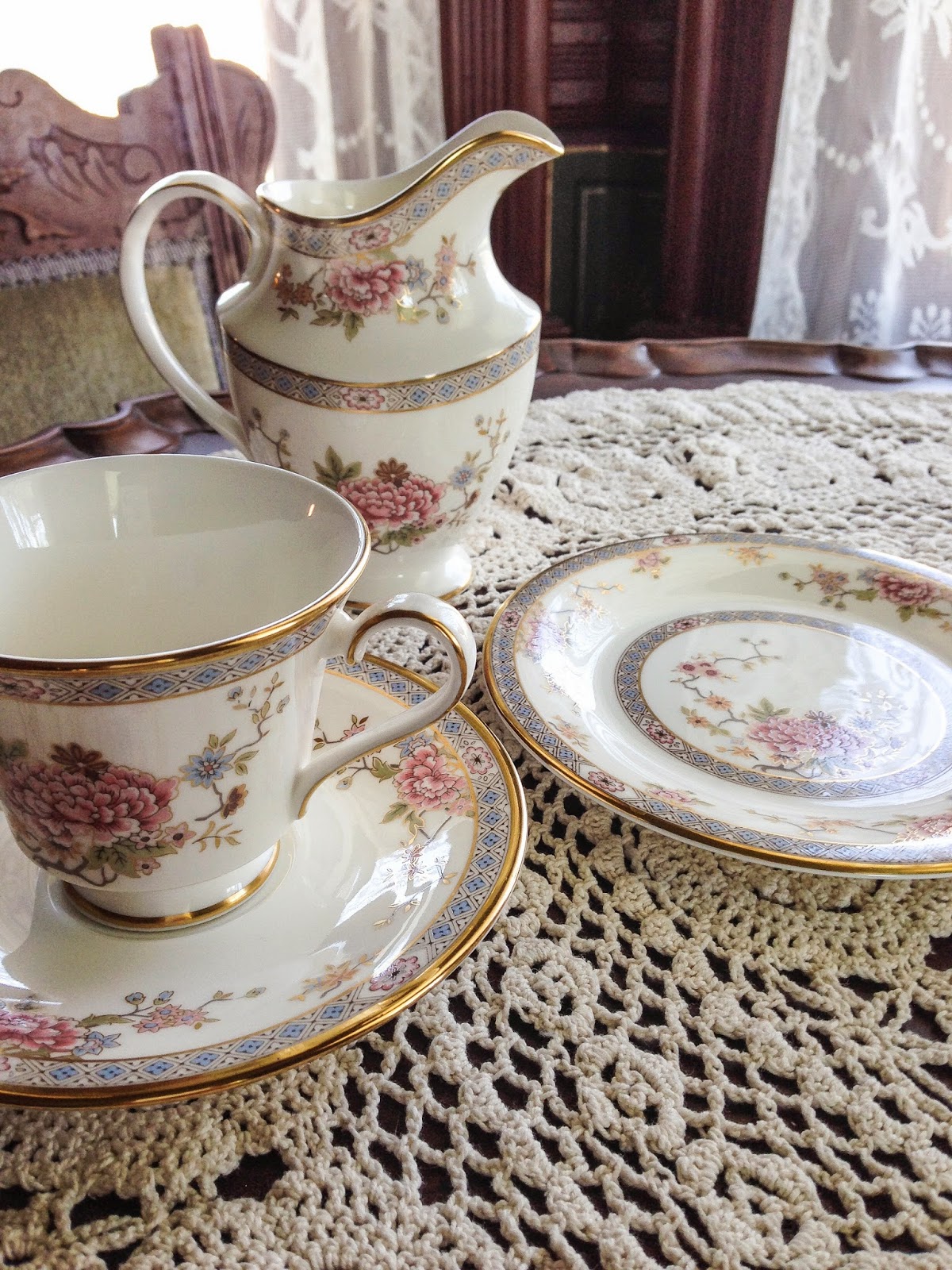 True to the name Canton, the Oriental influence is clear with the peonies and twisted branches and asymmetrical design. According to Replacements, this pattern was made from 1978 to 1996. I picked this pattern out when I was 20 and by the time I got married at 24 I already had a full set of 12, so I didn't register this as my formal china at the jewelry store. But I didn't use this china until I got married, so I still consider it my wedding china as you can see from this earlier blog post, 30th Anniversary Party.

Here are some closeup views. 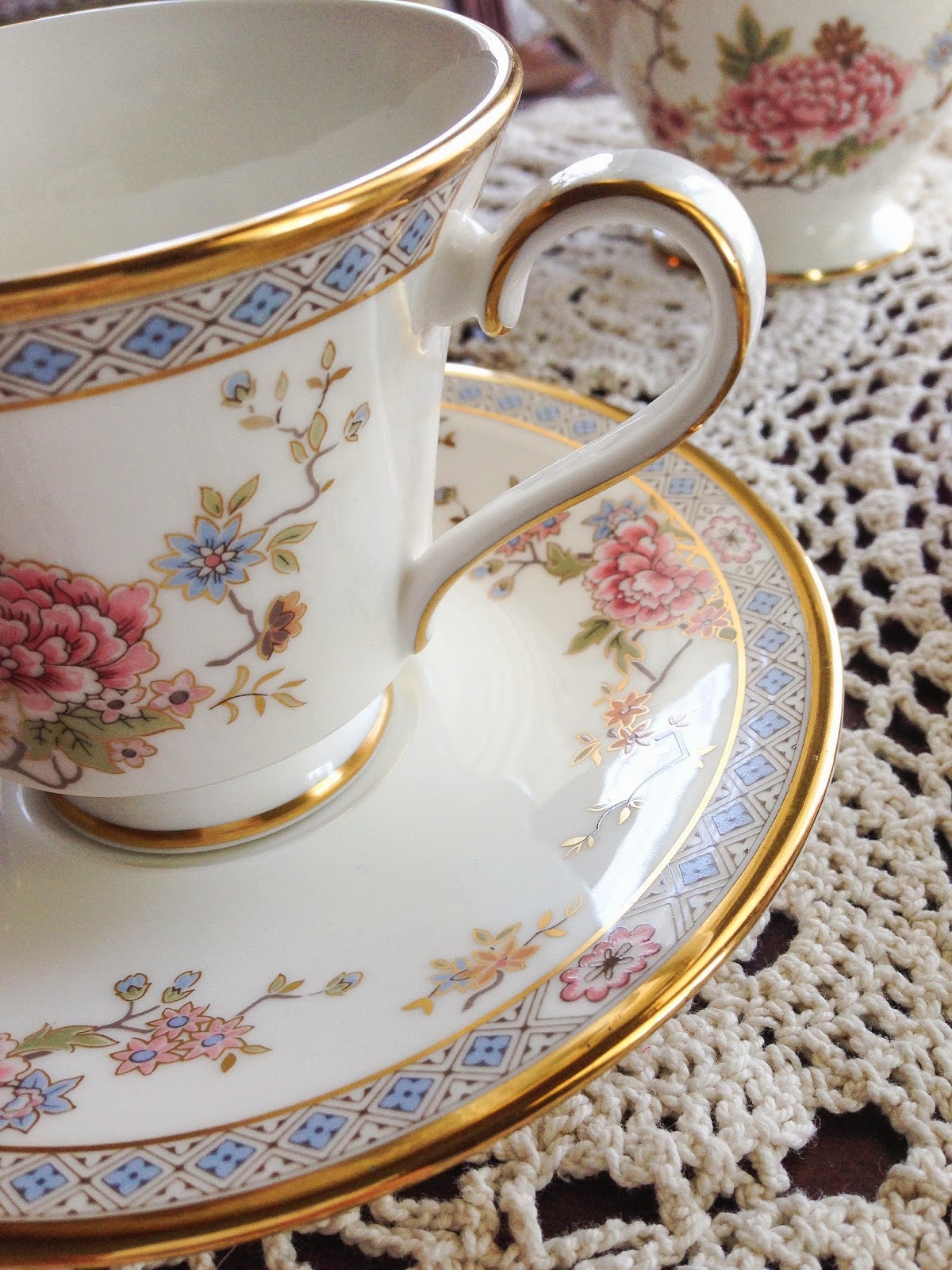 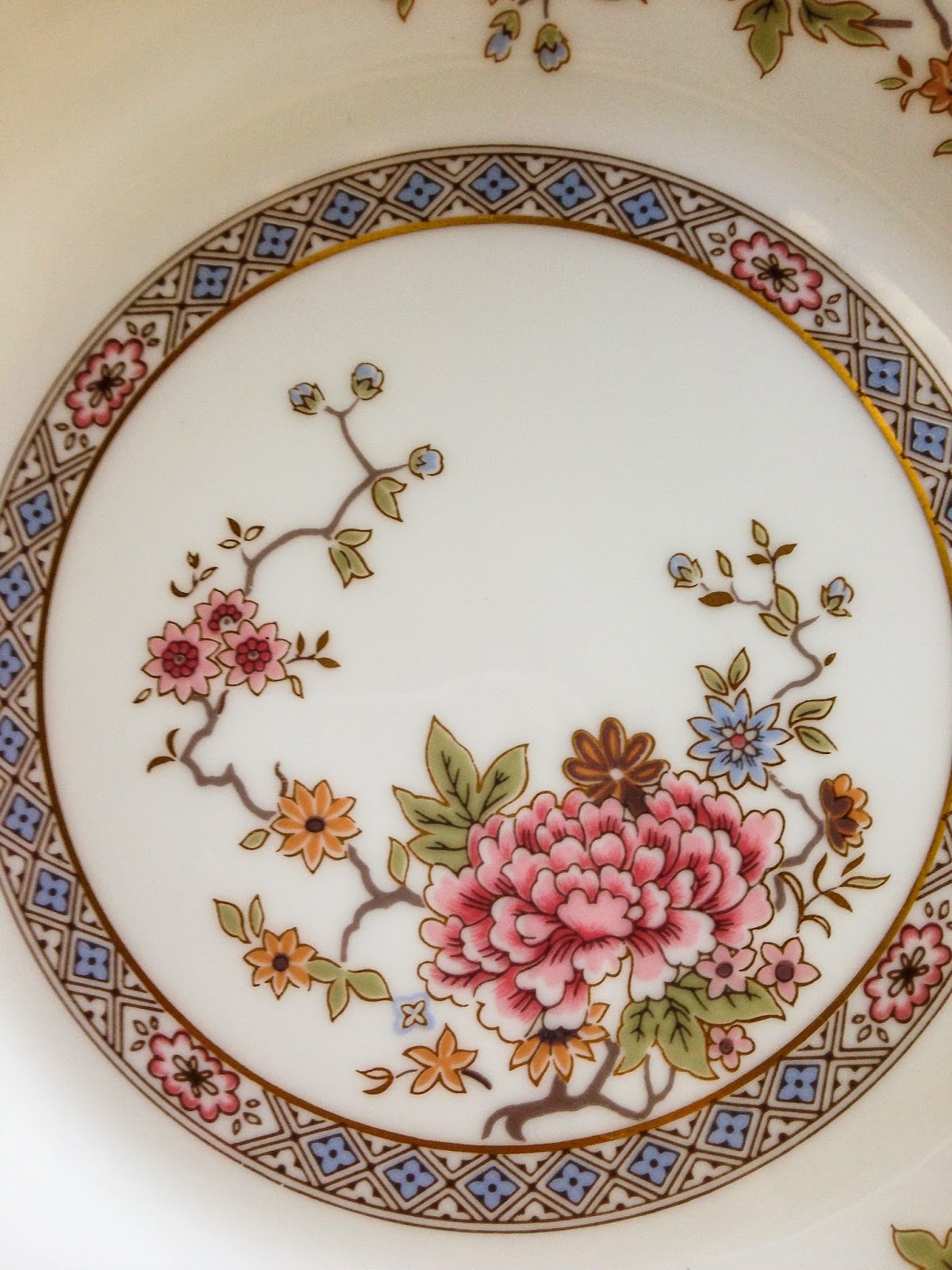 When I consider that I chose this in about 10 minutes YEARS ago with no thought to practicality, it is amazing that I still love it! I ended up having two daughters and we had pink birthday and tea parties on this. My dining room now has an Oriental theme with cherry blossoms on crooked branches and various shades of pink and red, so this china looks right at home! You can see photos of my dining room wallpaper HERE. 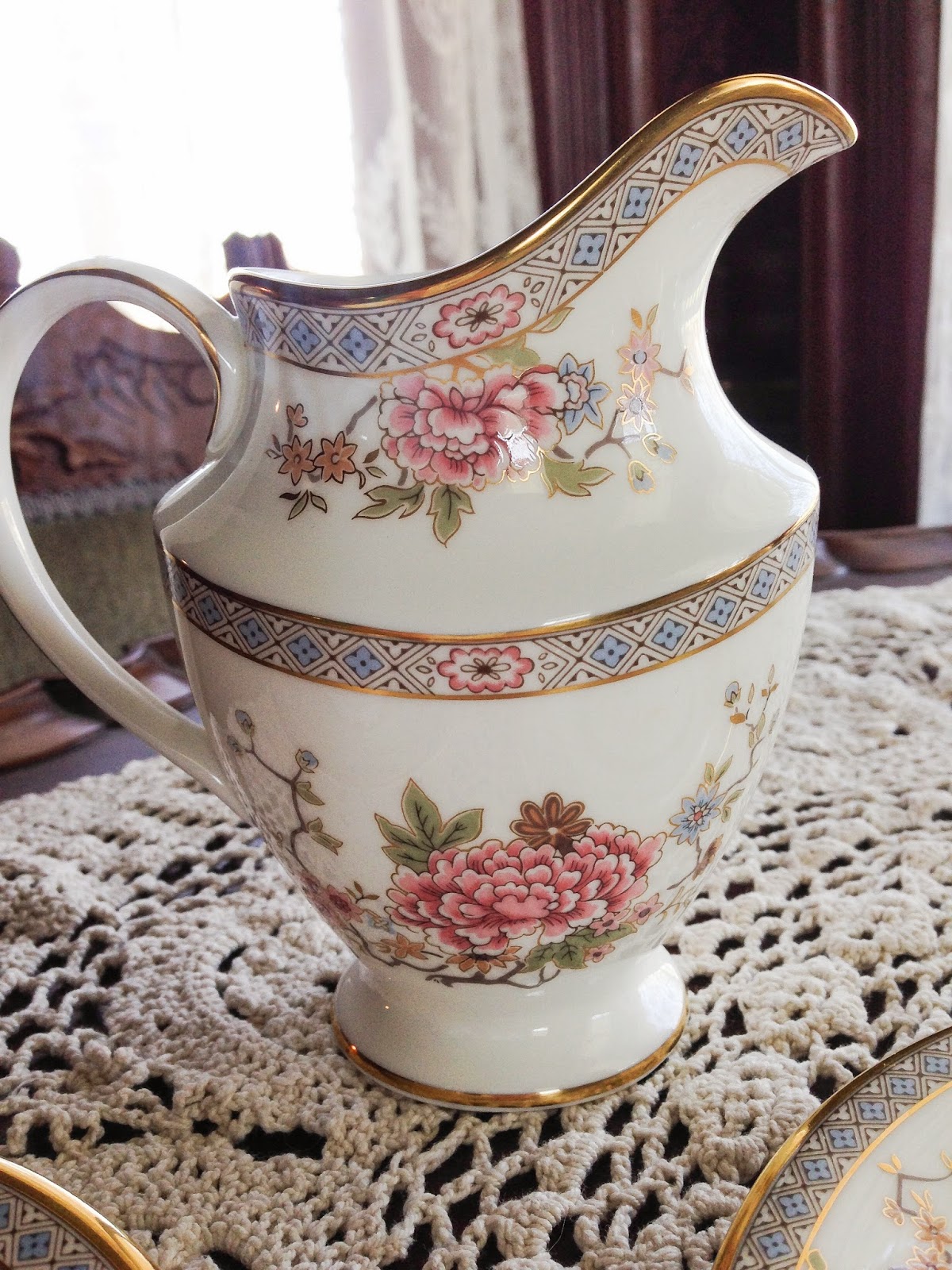 I will be linking to Tablescape Thursday at Between Naps on the Porch.

Posted by Jewel Sauls at 5:13 PM No comments:

Since my dining room is still out of commission because of a burst water pipe and probably will be for 2 or 3 months longer, I have decided to do a series of blog posts about my various china patterns.

Today I just want to share a little about one of my favorite china patterns, Spode Pink Tower. It is sometimes called Spode Tower Pink, which, I think, is because originally it was offered in different colors. The pattern name was Spode Tower and the descriptive color name came after. But the name on the back of my plates says Pink Tower, so that's what I am calling it! 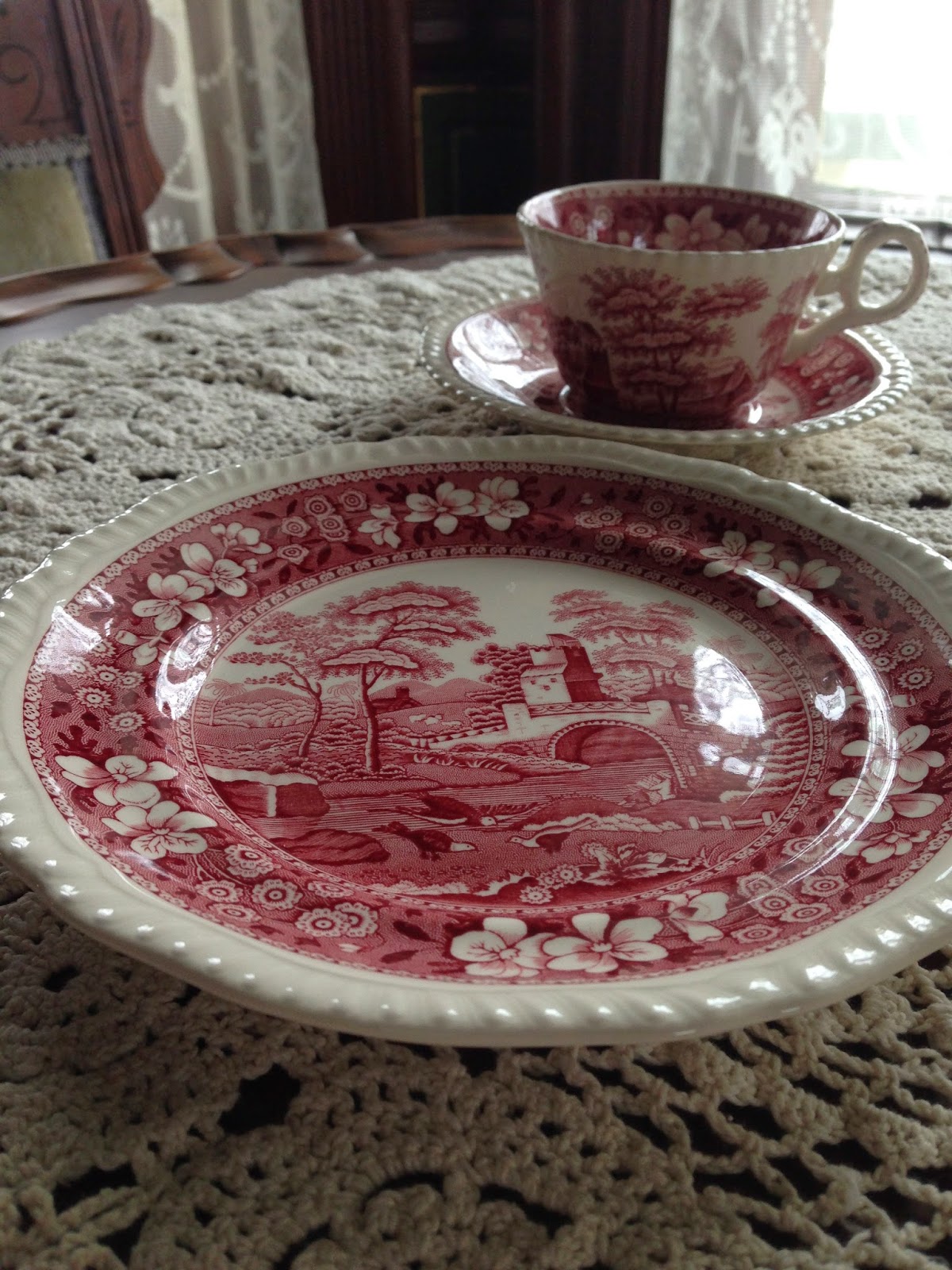 The design in the center is the Bridge of Salaro, near Rome as it was depicted in Views of Rome and its Vicinity, published c. 1796-1798. Spode first introduced the Tower pattern in 1814. In 1894, it was printed on the Gadroon Shape. According to the Spode History site, a pink version of the Tower pattern was released for American markets about 1923.

It must have been around this time that it caught my grandmother Carmen's eye. She was married in 1915 and this was her china pattern. My mother Carmen did not inherit any of it from her mother, so she started collecting this pattern for herself. Then in 2002 for my 20th anniversary, I started collecting this pattern. My full name is Carmen Jewel, although I have always just gone by Jewel.

I love the special details like the gadrooned (which means ornamentally notched) edge. 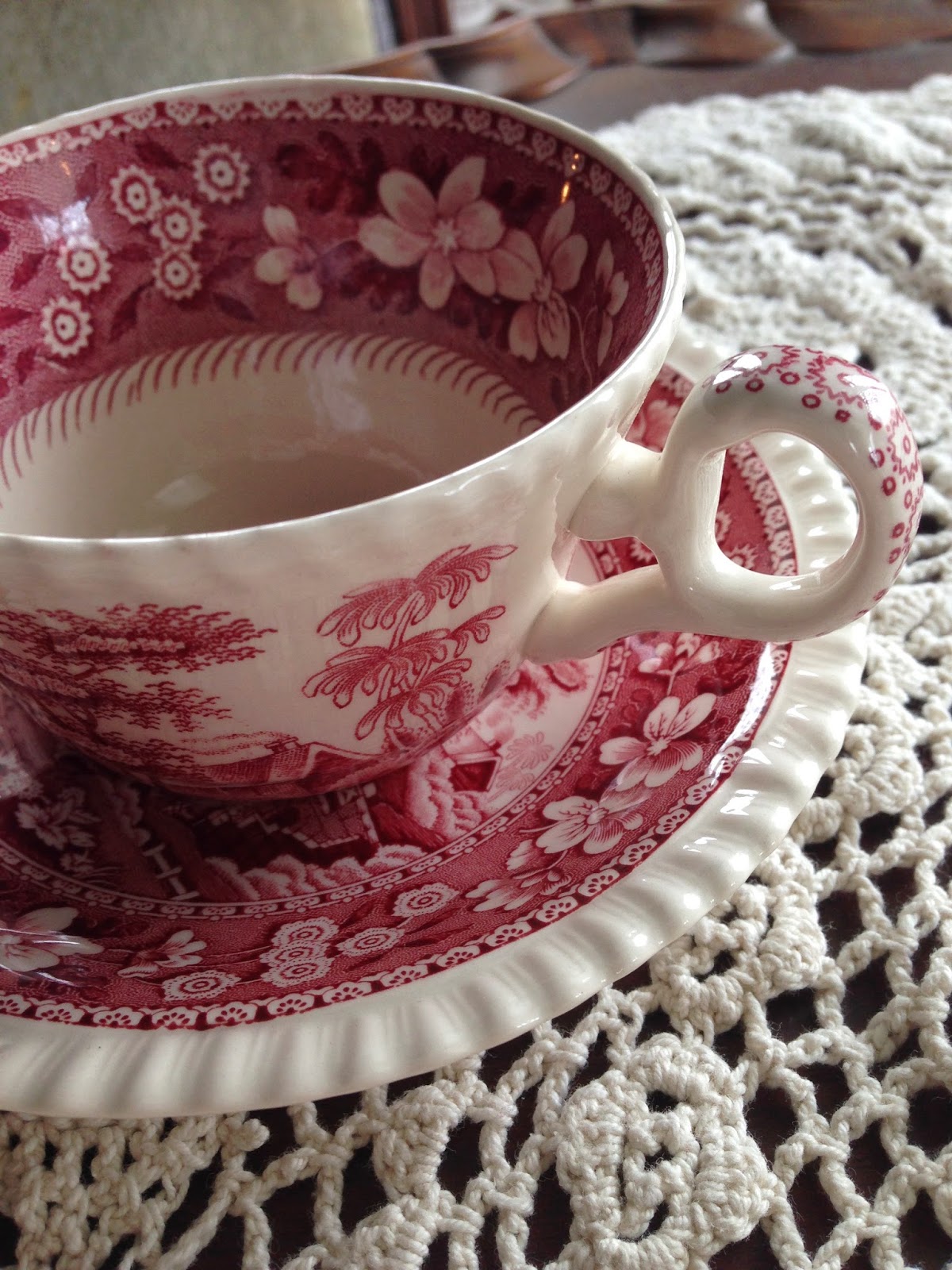 I also love the subtly scalloped shape of the plates and the creamy color with the red/pink designs. The border also features cherry blossoms, which are also in my dining room wallpaper. 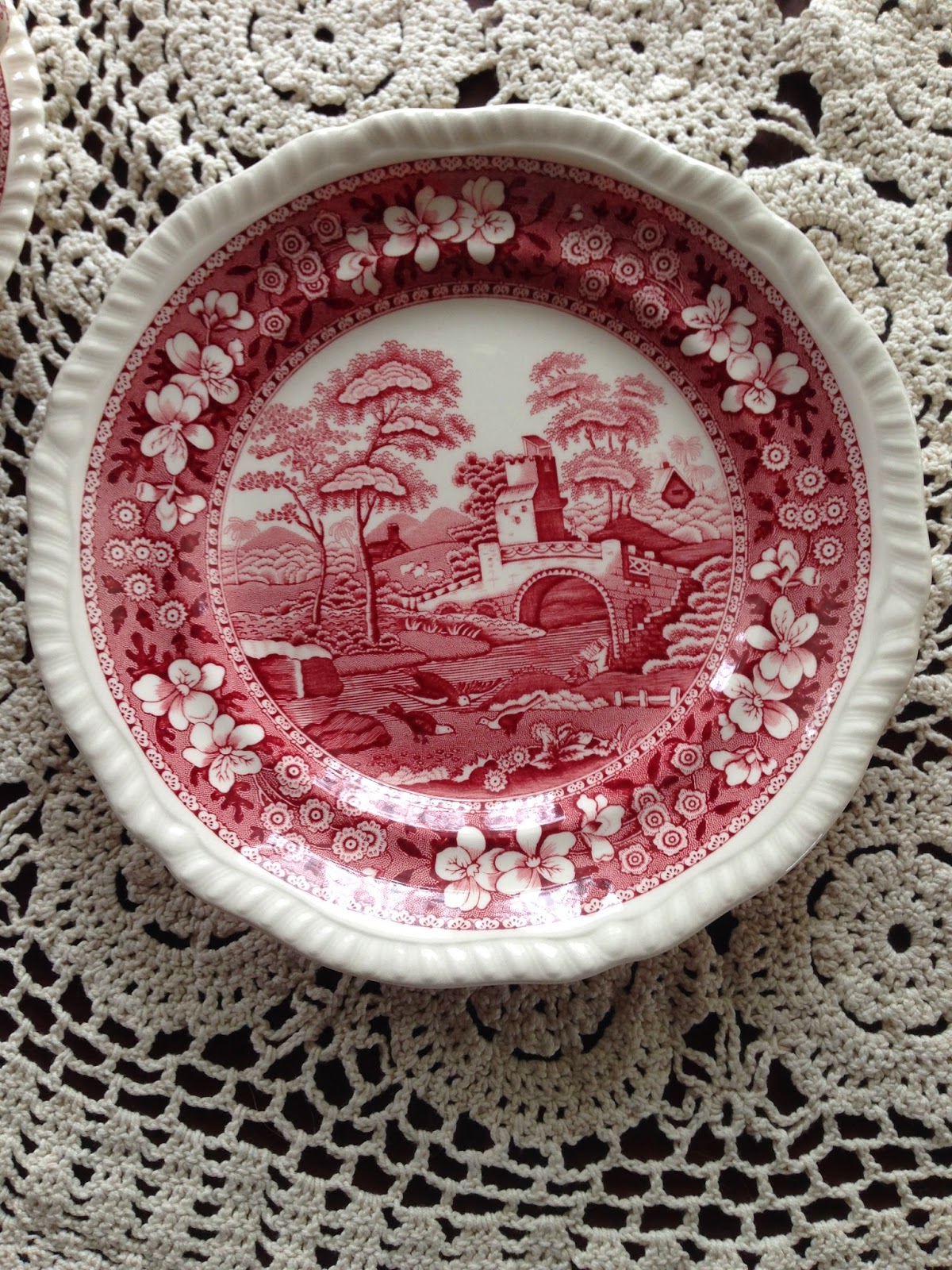 Unfortunately, Spode's factory at Stokes-on-Trent closed in 2009 and this pattern was was discontinued,  but it is still available on eBay and at Replacements.

So who knows, maybe sometime in the future my daughter Carmen will start collecting it. History has been known to repeat itself! 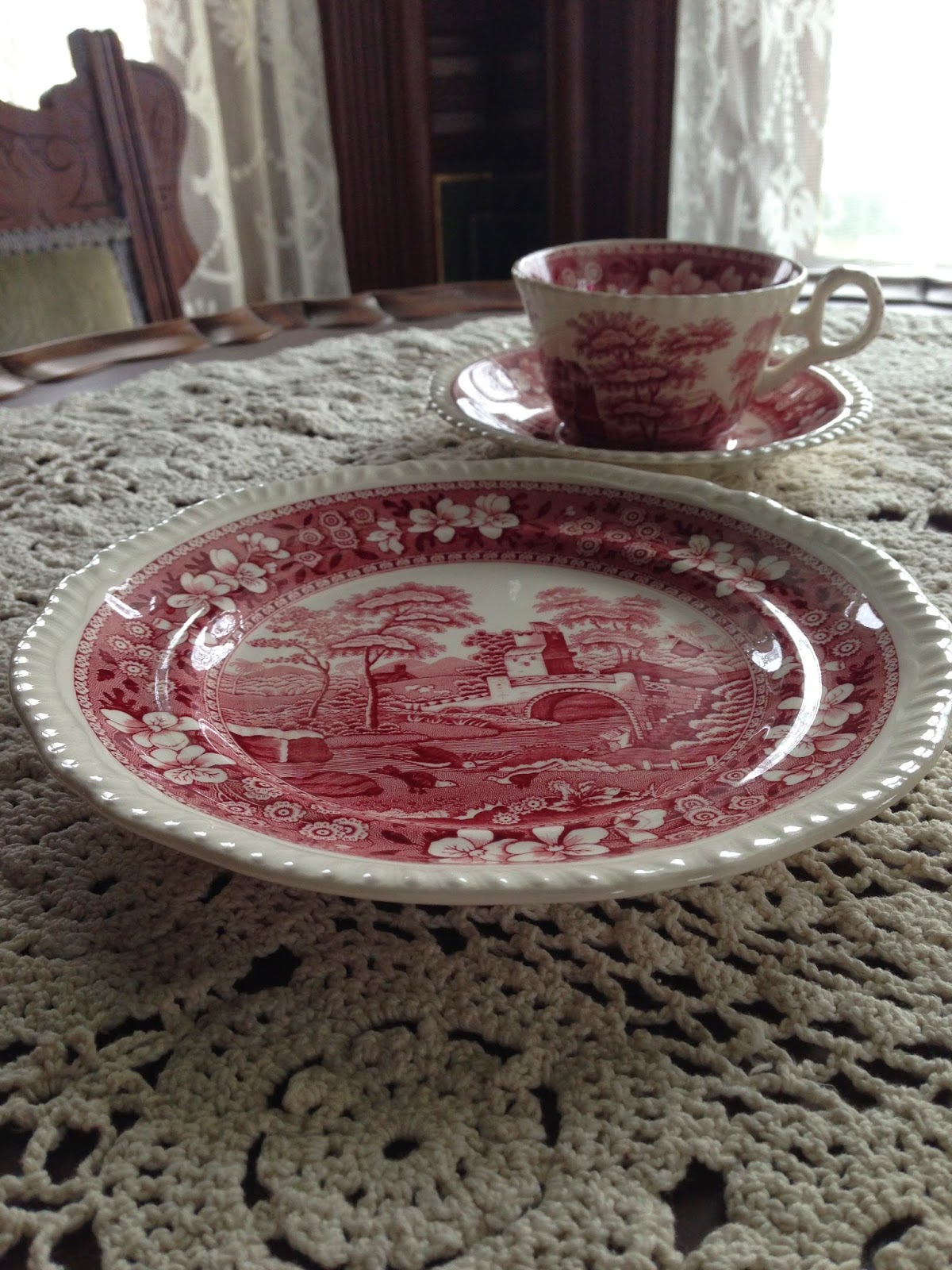 More of the history is on this wonderful blog by the former curator of the Spode Museum. SPODE TOWER

I will be sharing this with Tablescape Thursday at Between Naps on the Porch.

Posted by Jewel Sauls at 4:06 PM No comments: