I dressed my table in snowflakes this week and what do you know - Mother Nature gave us a little snowfall also! 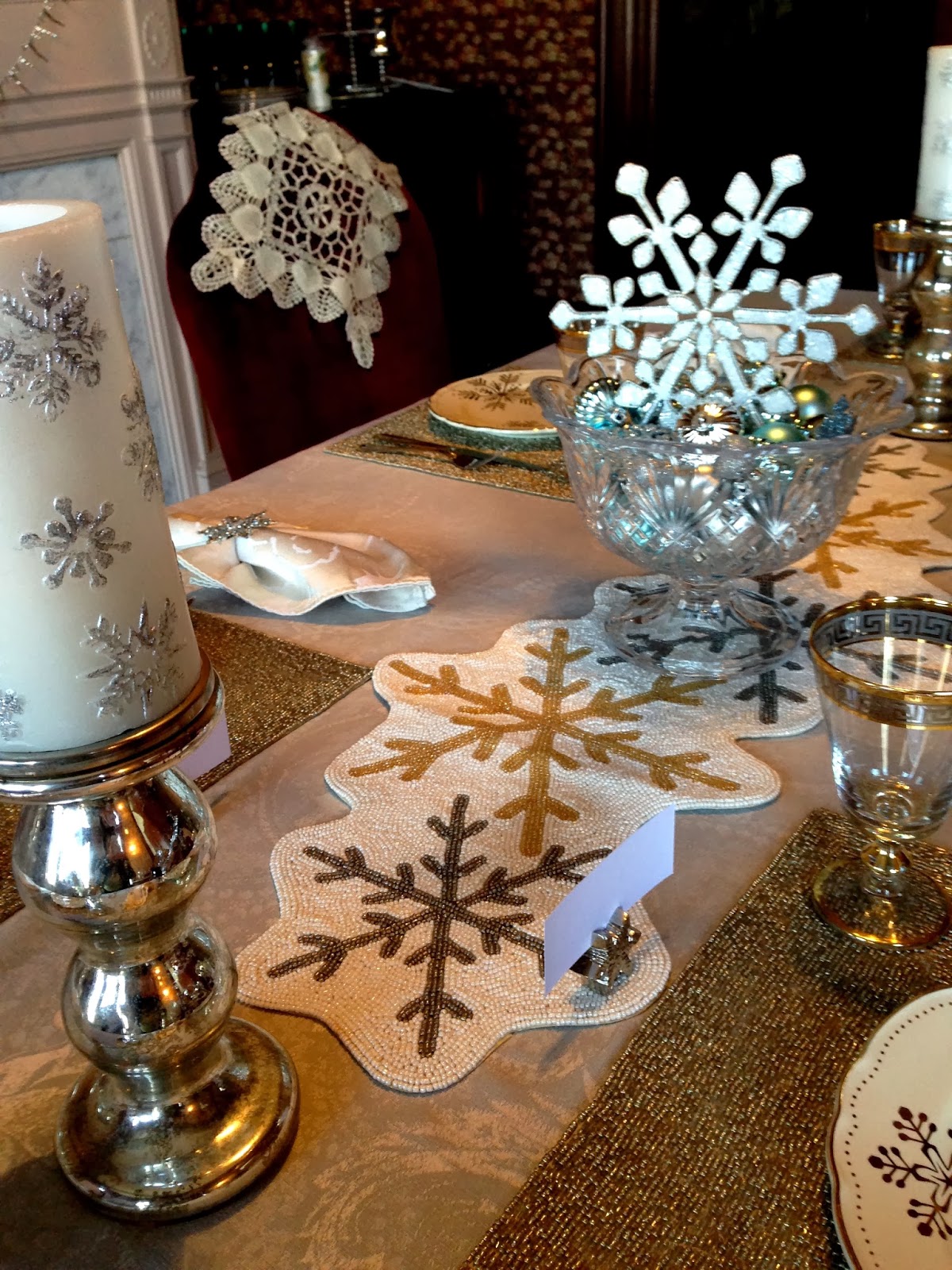 I started with my silvery gray tablecloth, a beaded white, silver and gold snowflake runner and platinum beaded placements, all from Target. 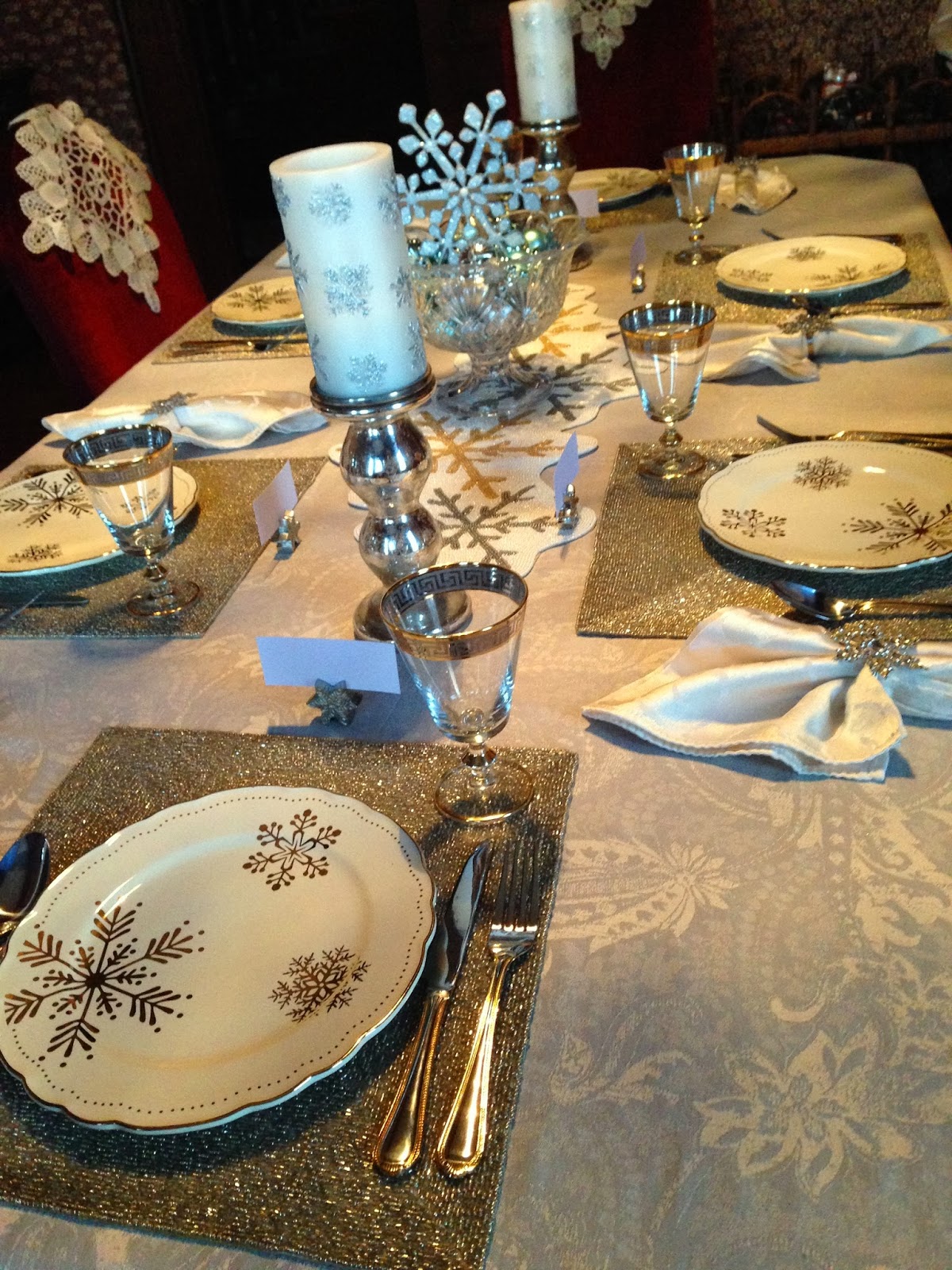 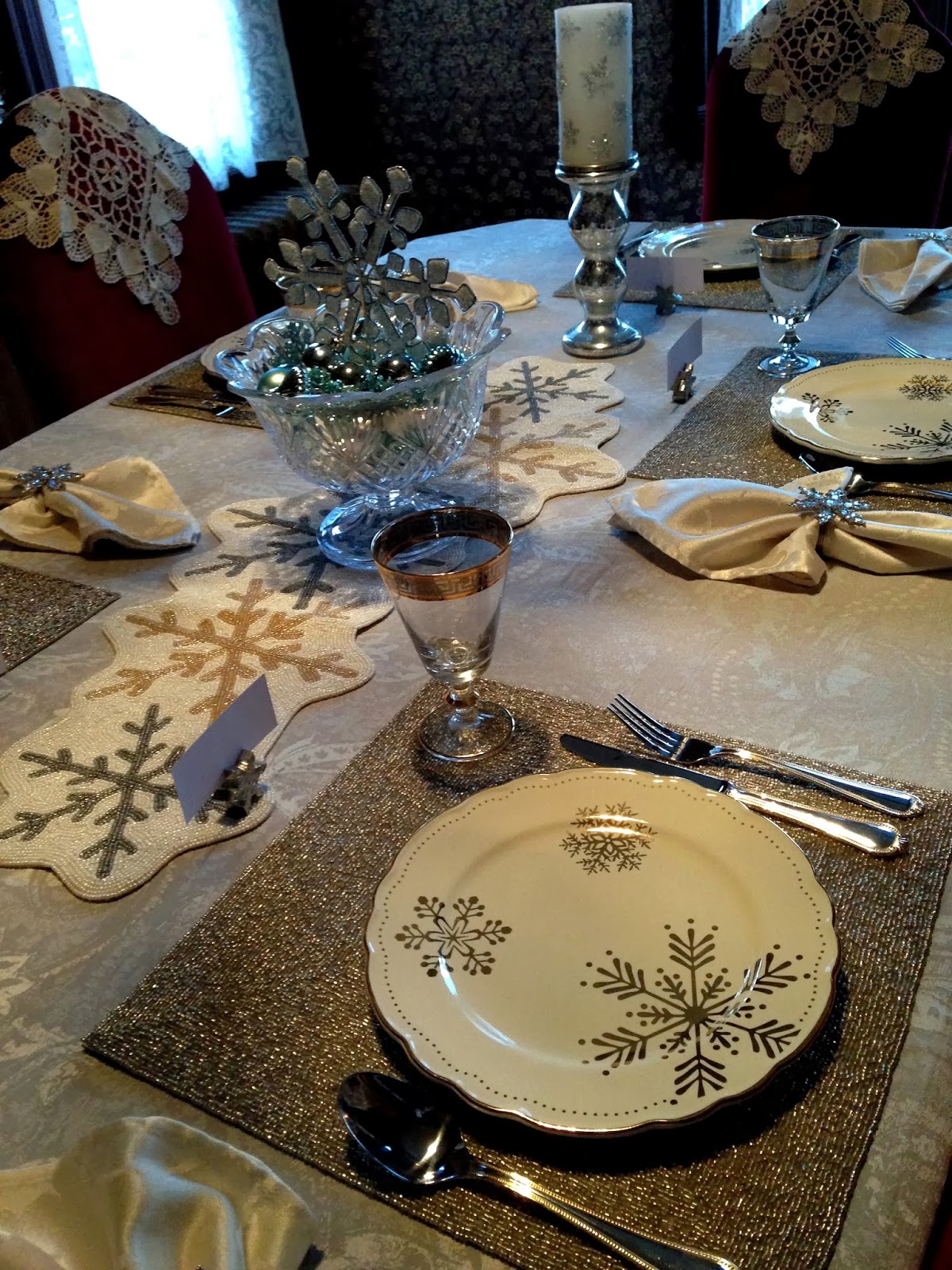 On top of the beaded place mat I added a Golden Snowflake plate from Cracker Barrel, my Cambridge Verona flatware which has a gold edge and water goblets with a gold and silver Greek Key design (TJ Maxx). I used creamy white napkins with a silver and rhinestone snowflake napkin ring (Target). 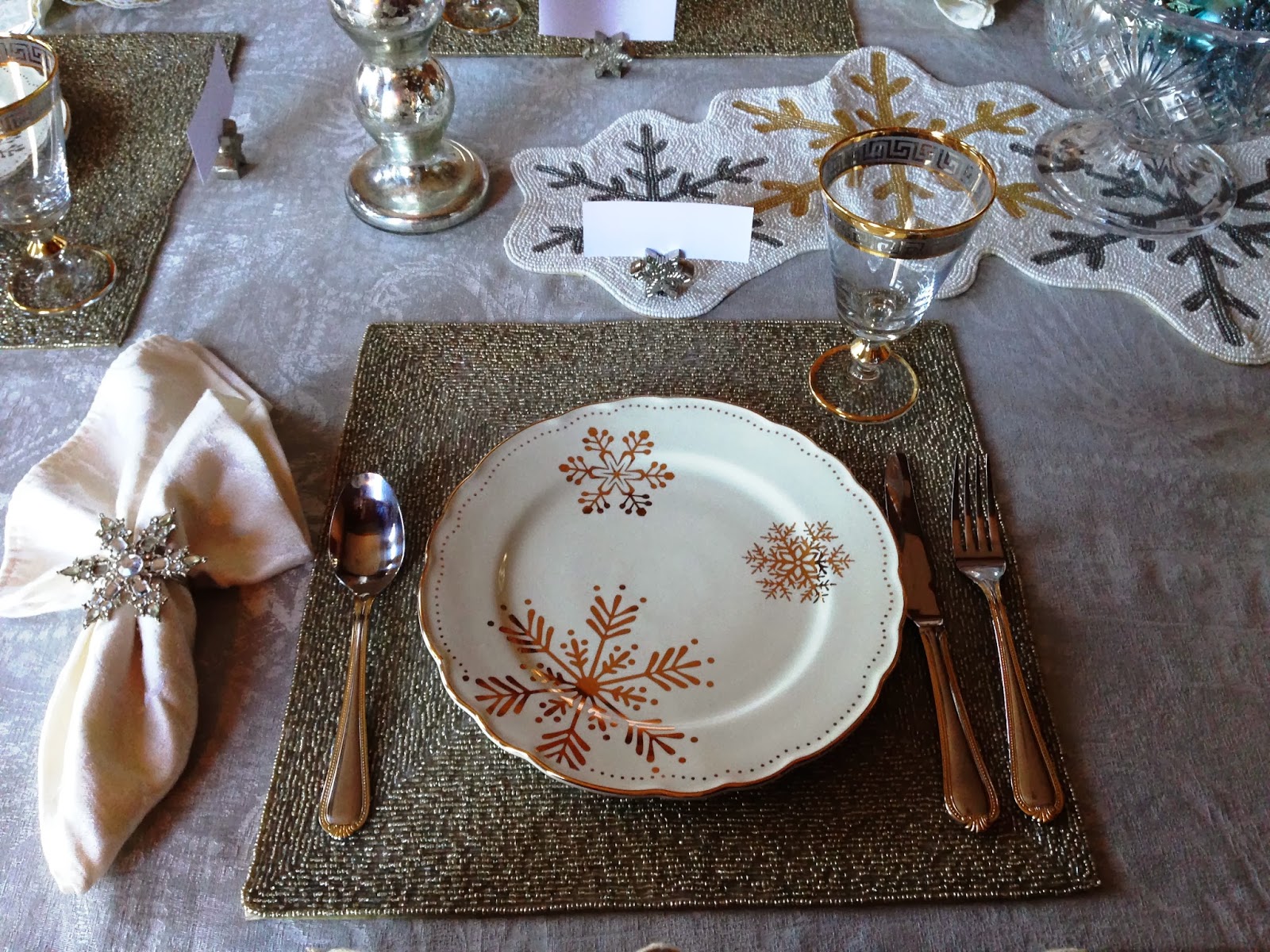 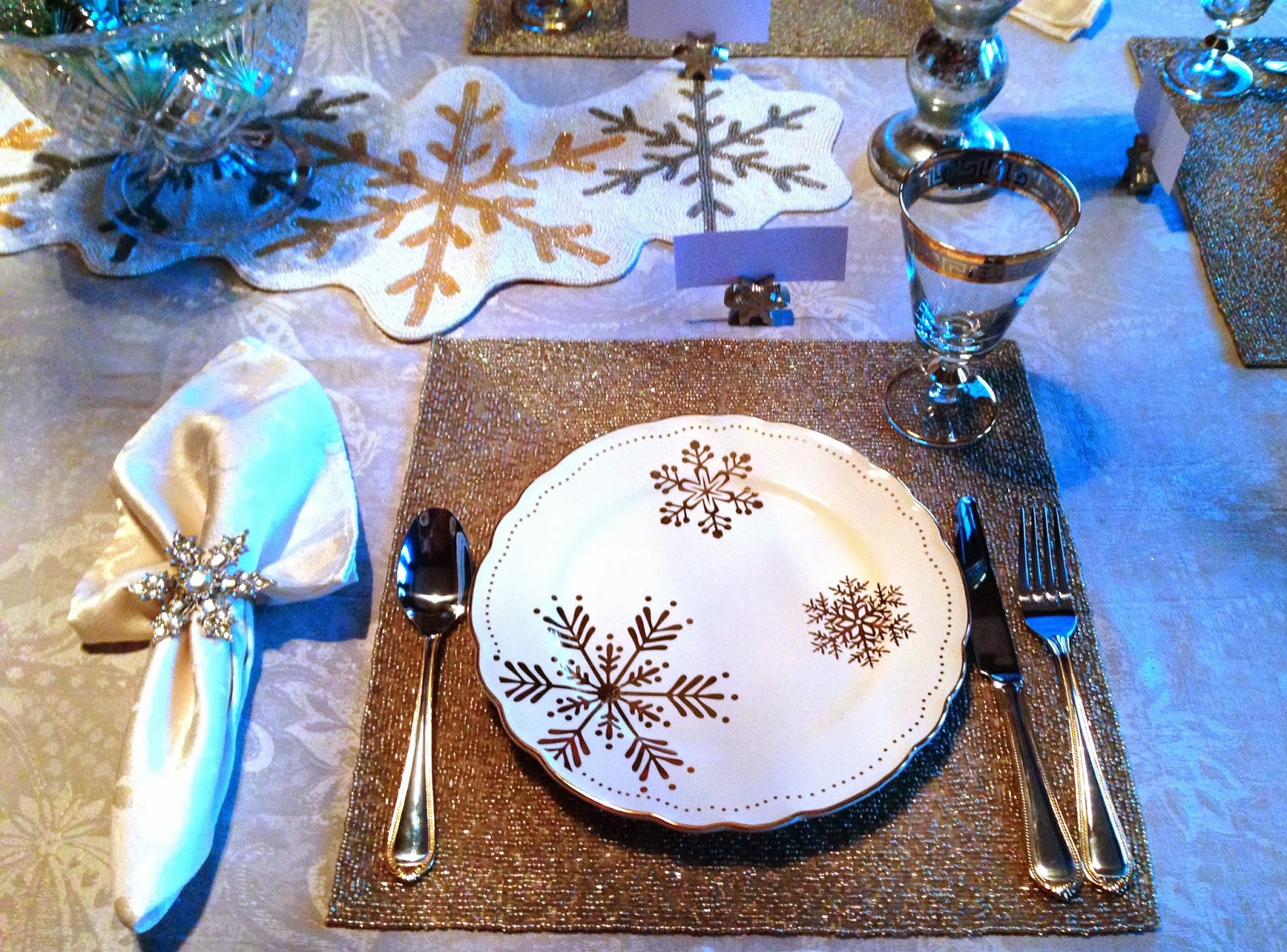 For the centerpiece I had a crystal bowl full of silver and blue ornaments. My daughter Emily added her beaded snowflake Christmas tree topper for the perfect touch! 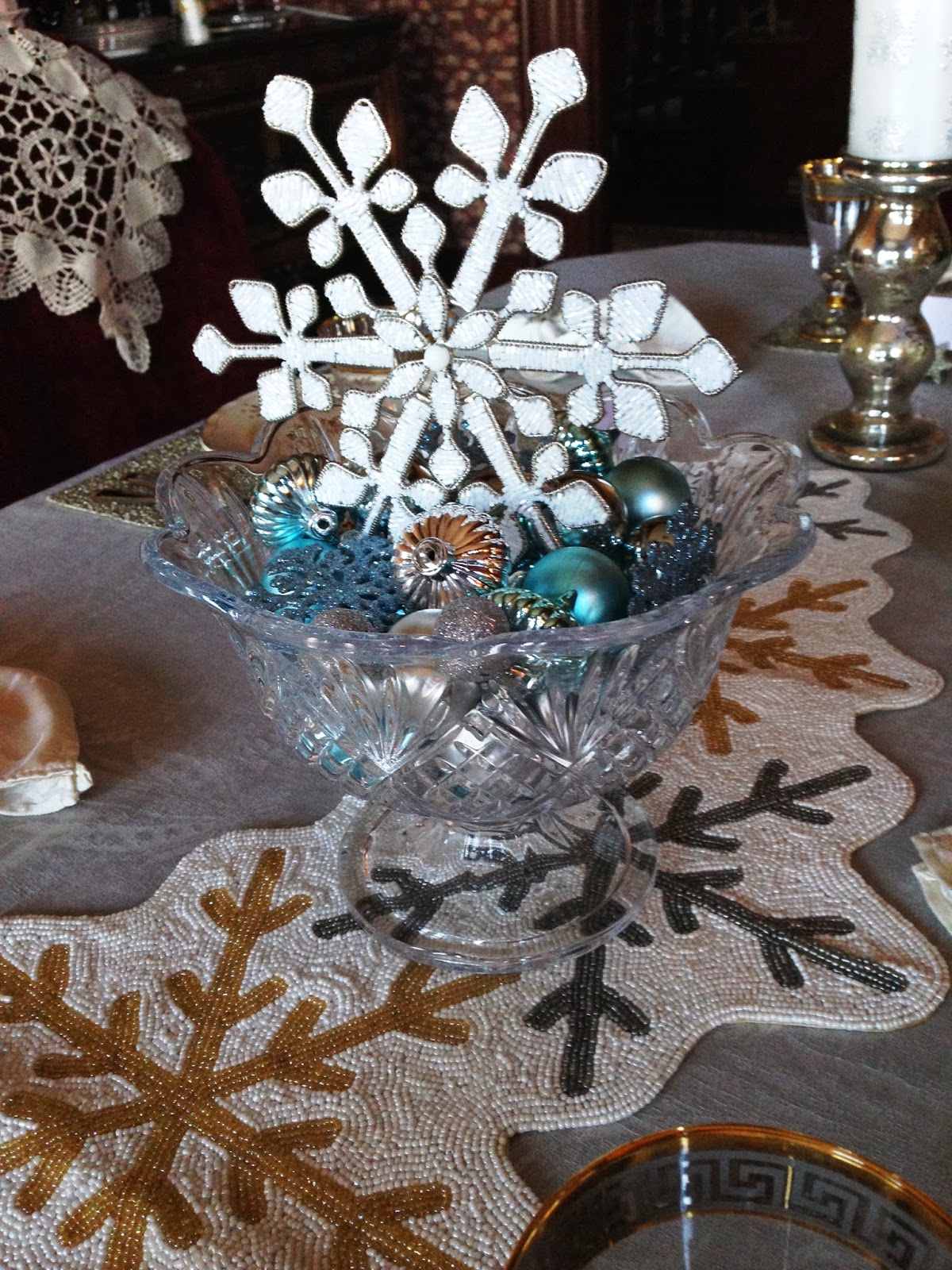 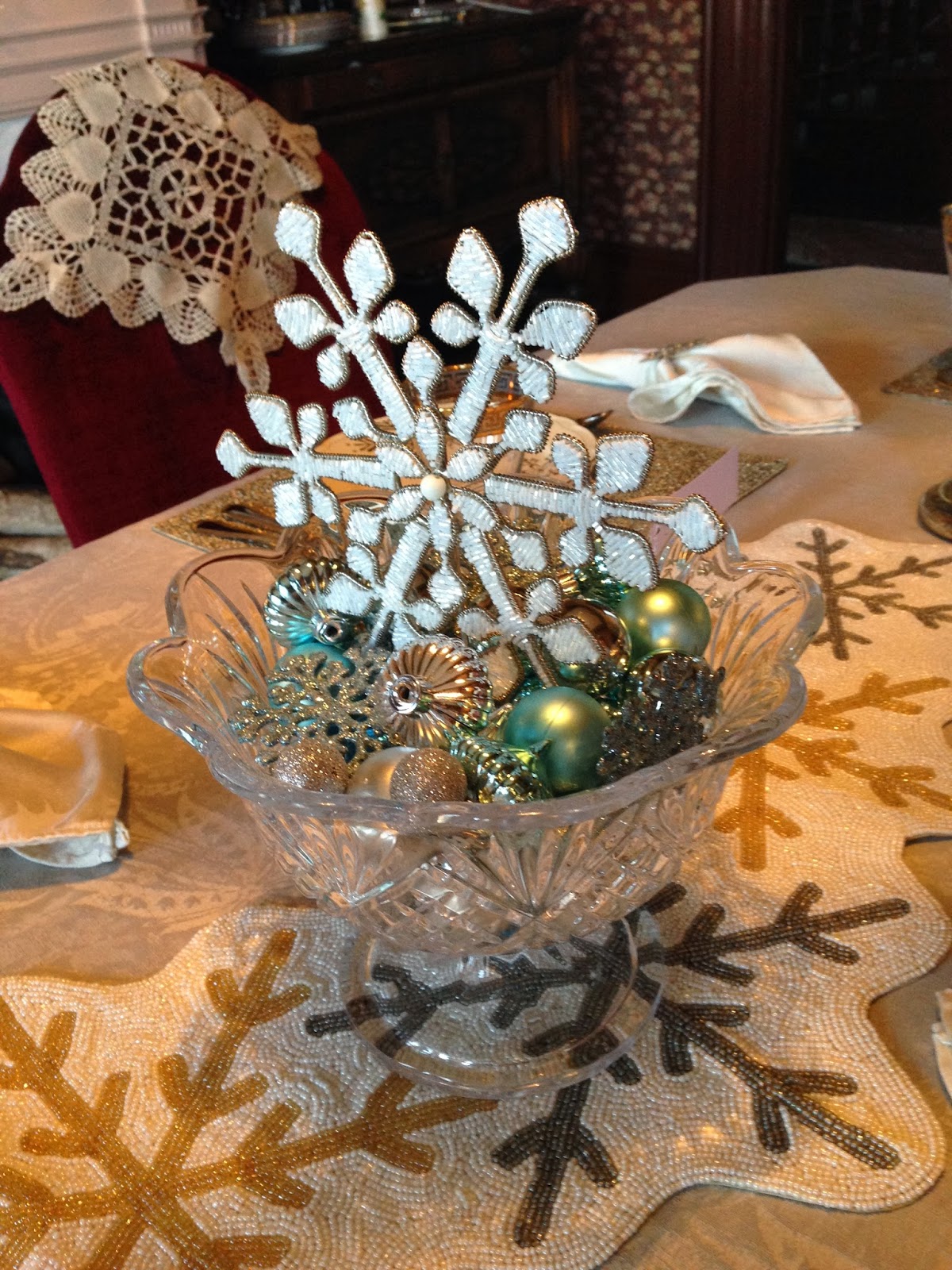 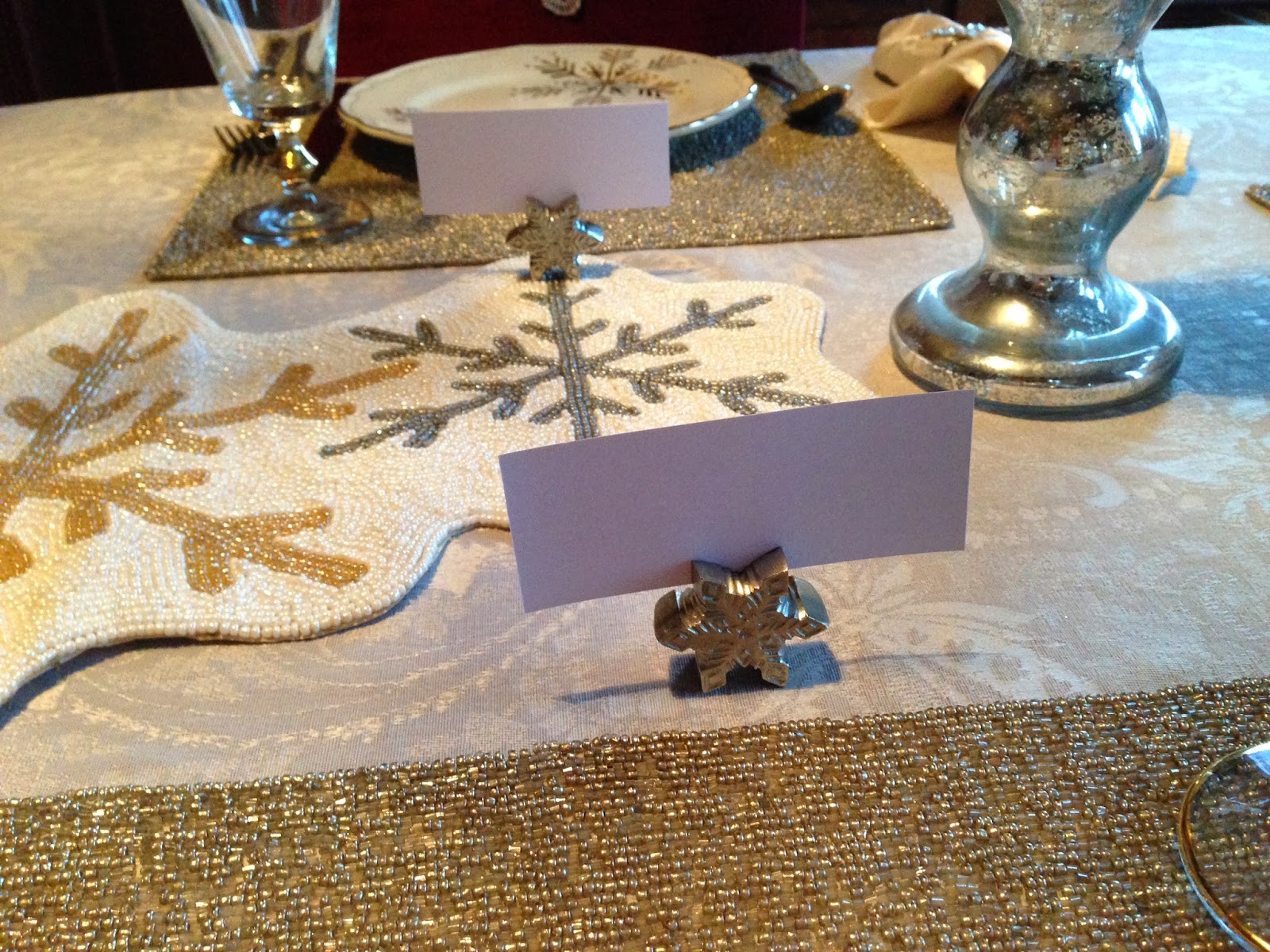 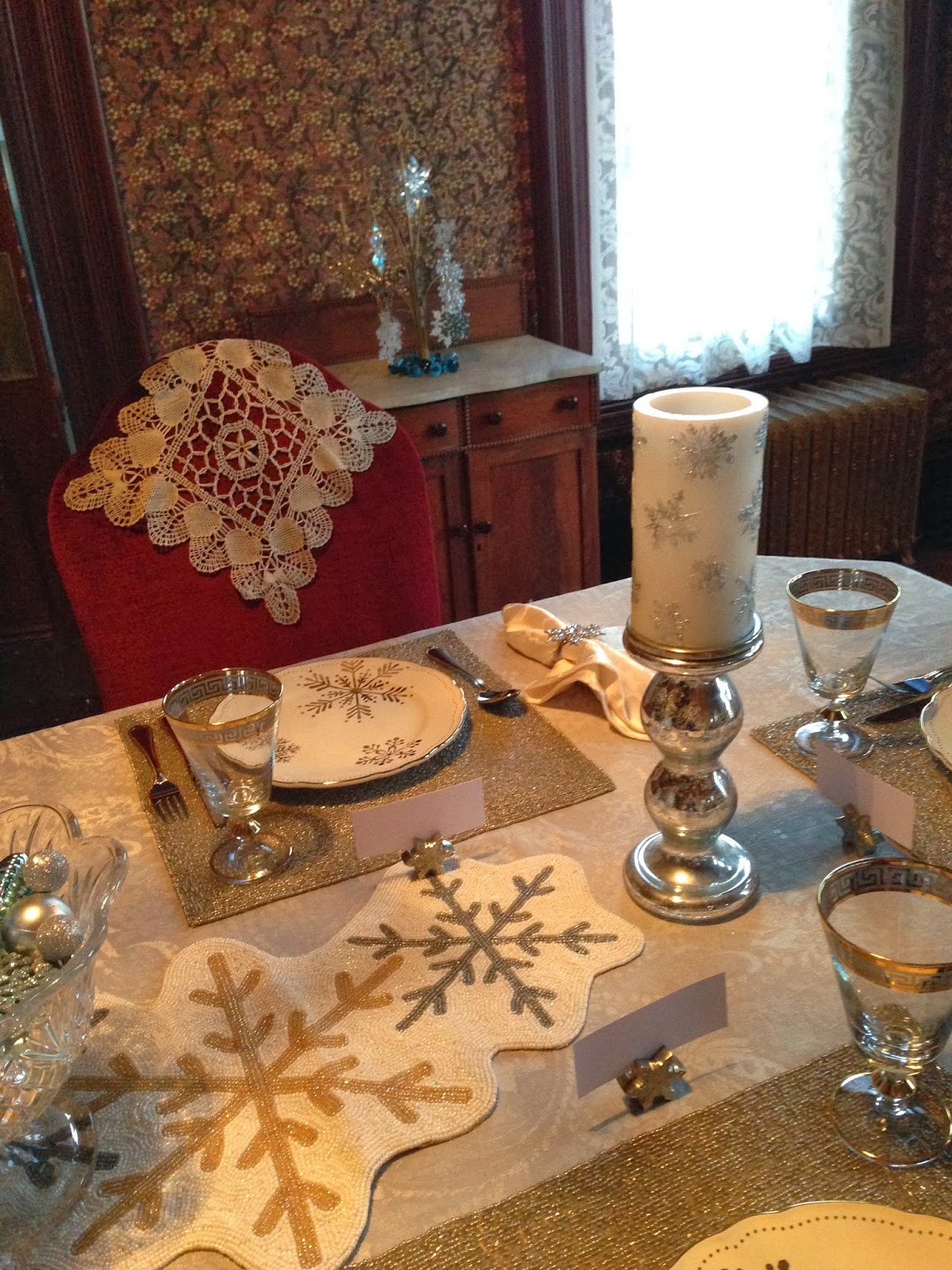 Over on the little table is an ornament tree with lots of snowflakes. 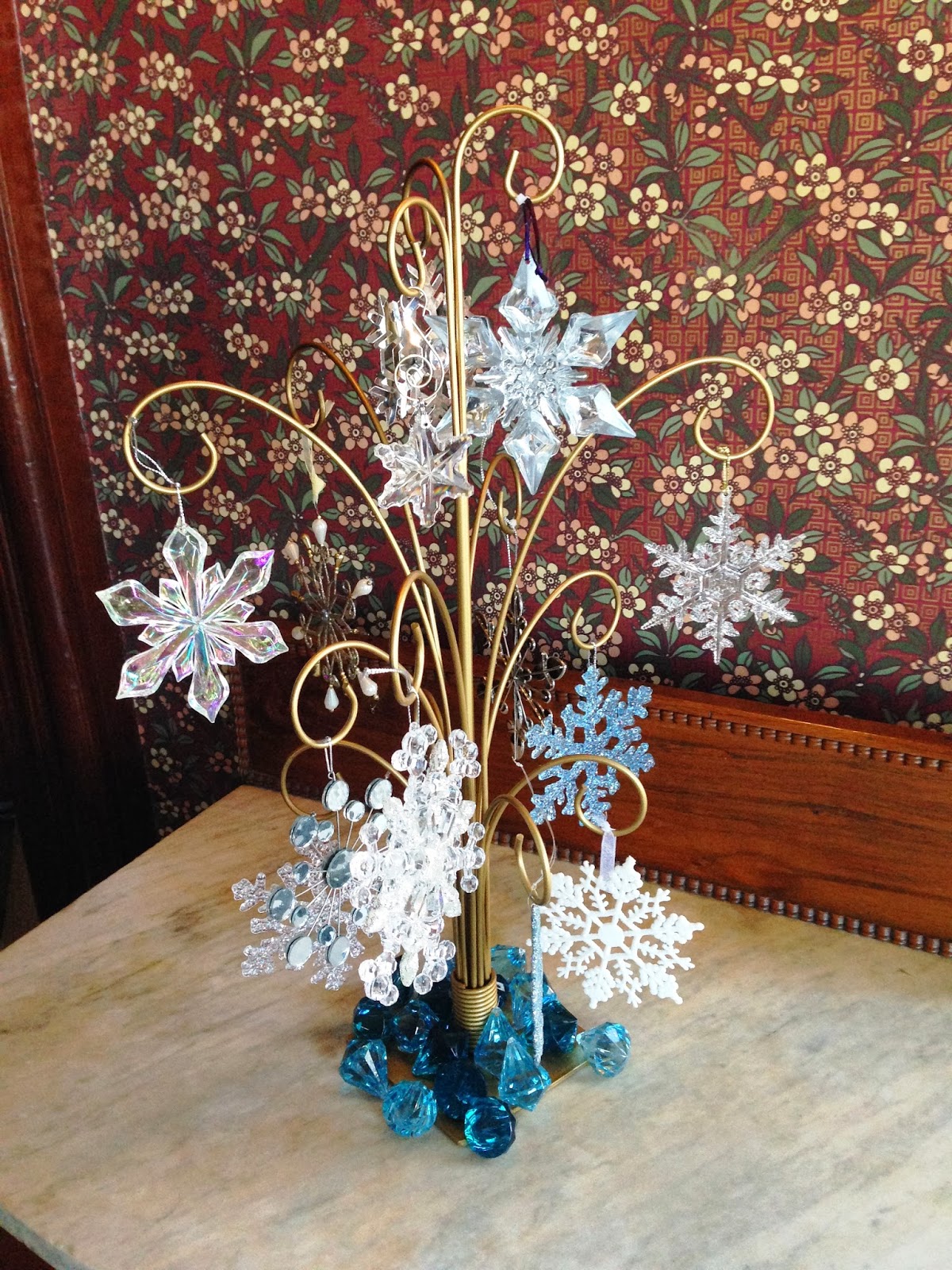 My mantle is full of snowmen! 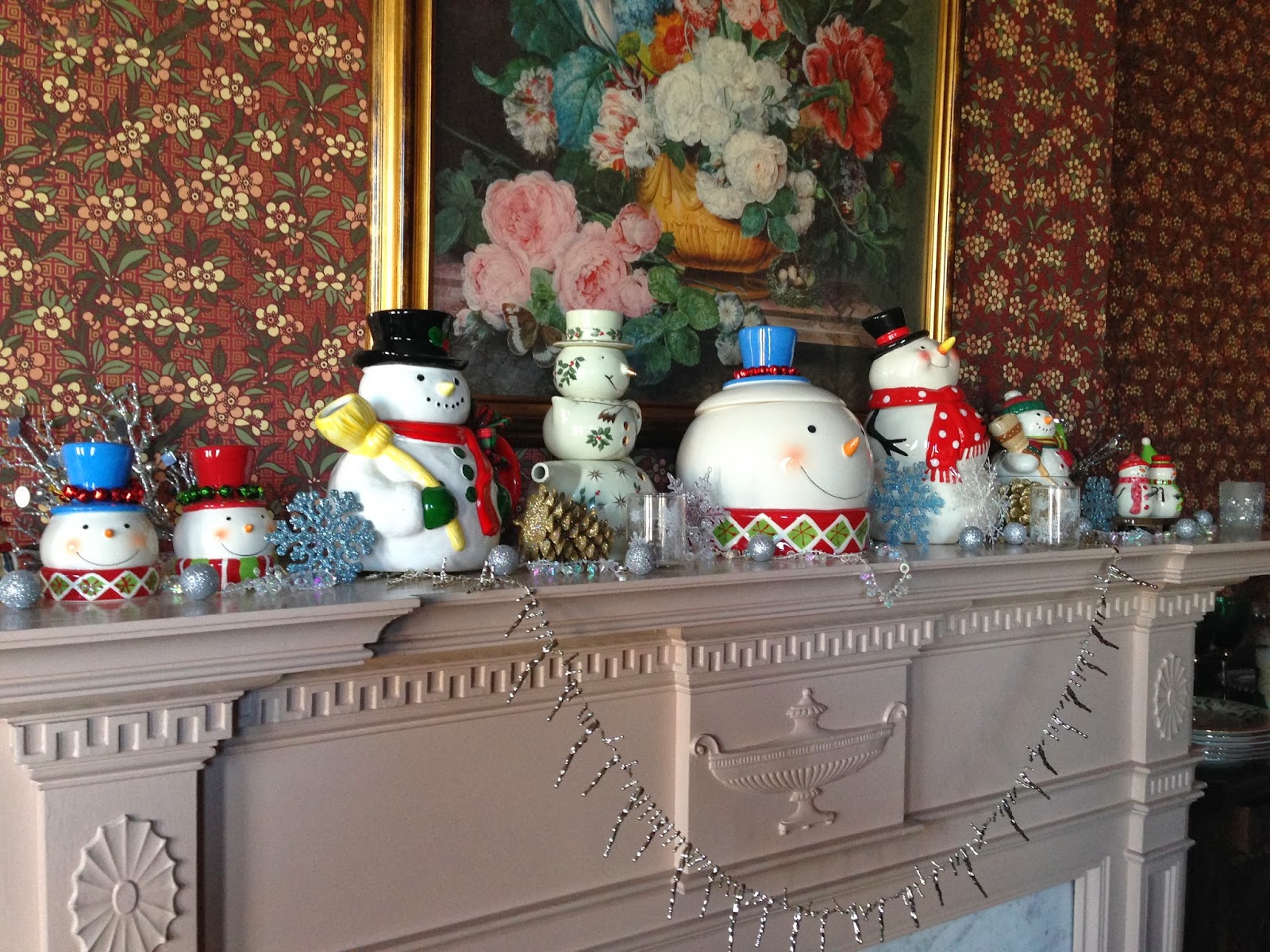 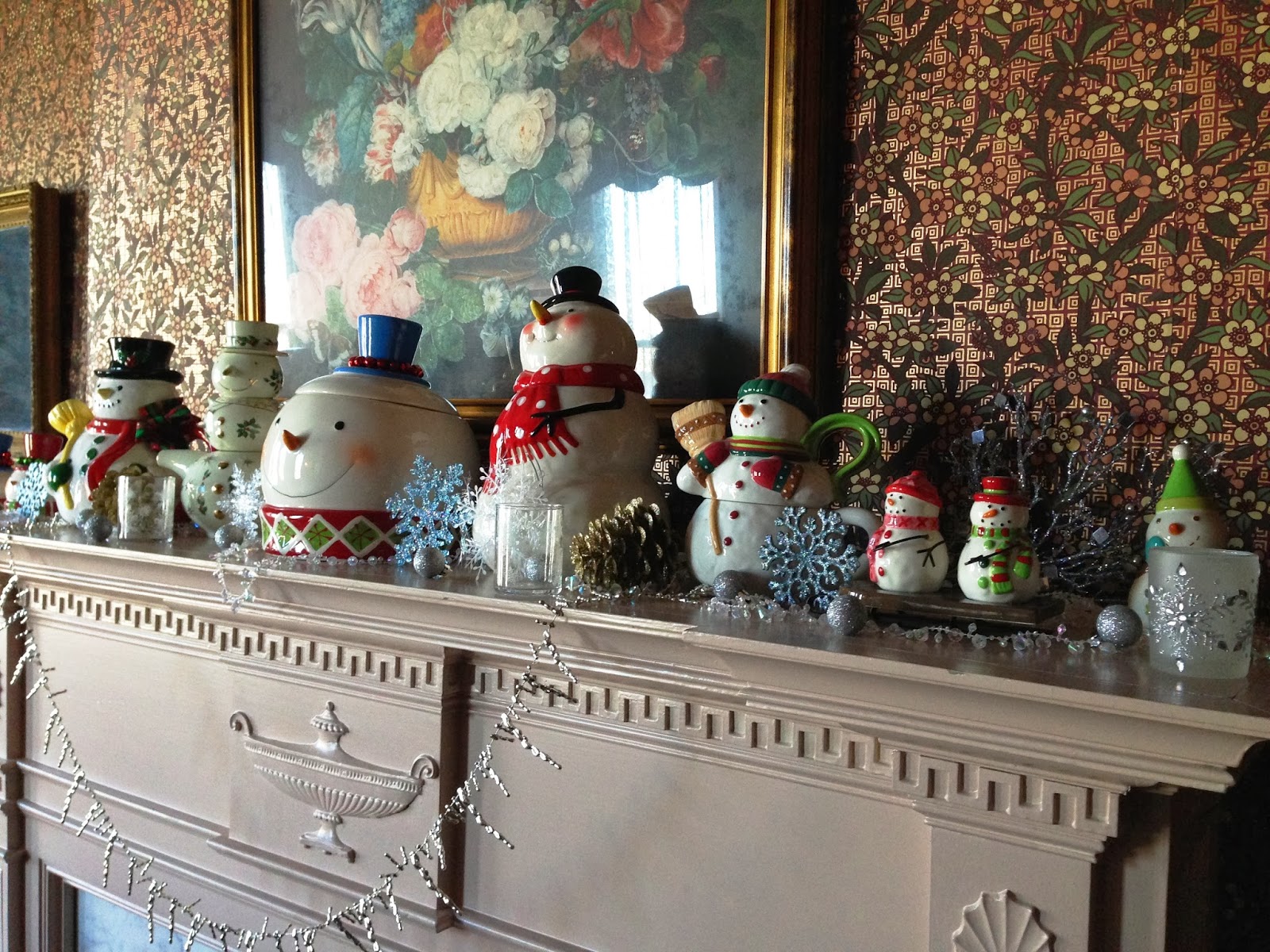 And on my back door there is an icy wreath! 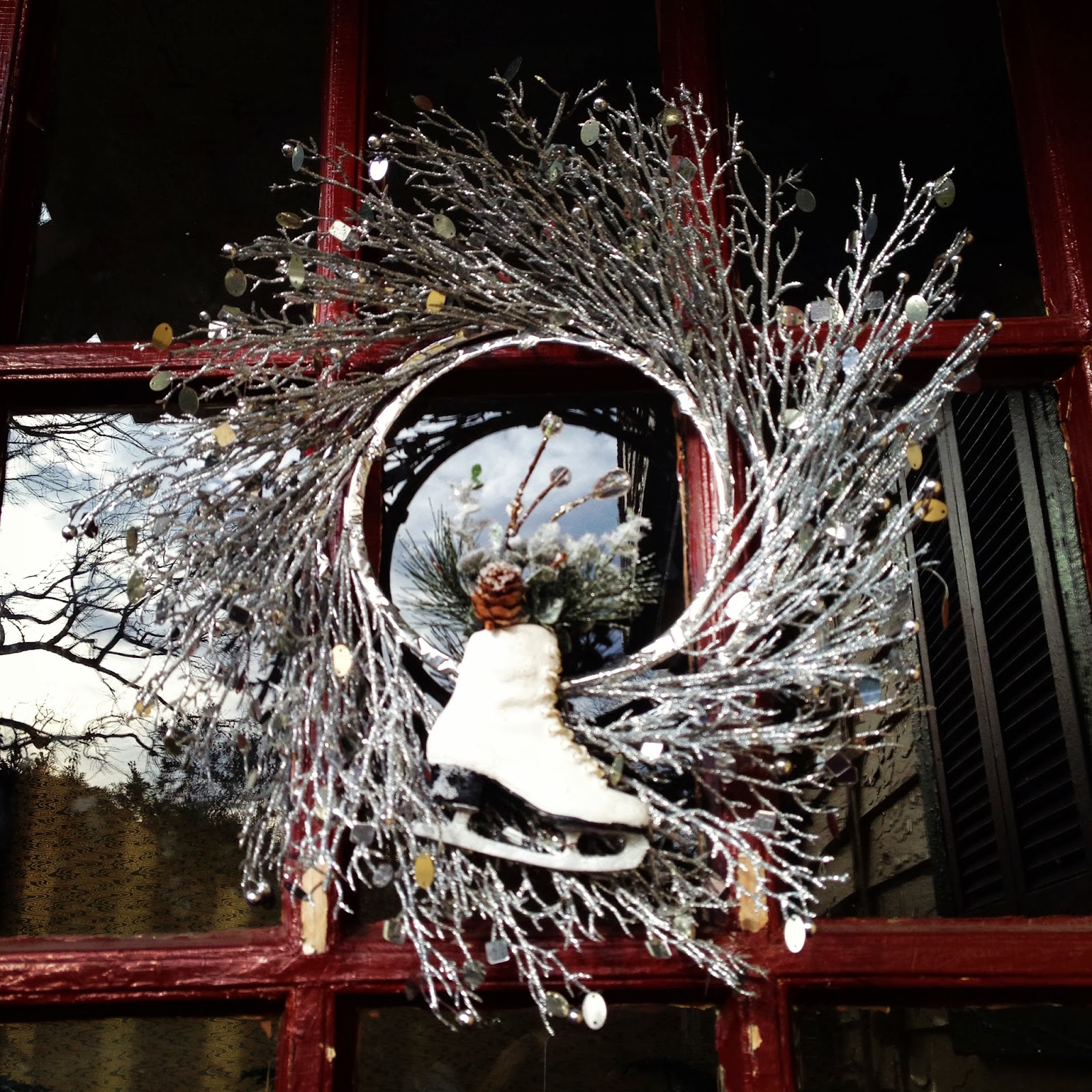 All in all, I think I have more snowflakes on the inside than we saw outside! 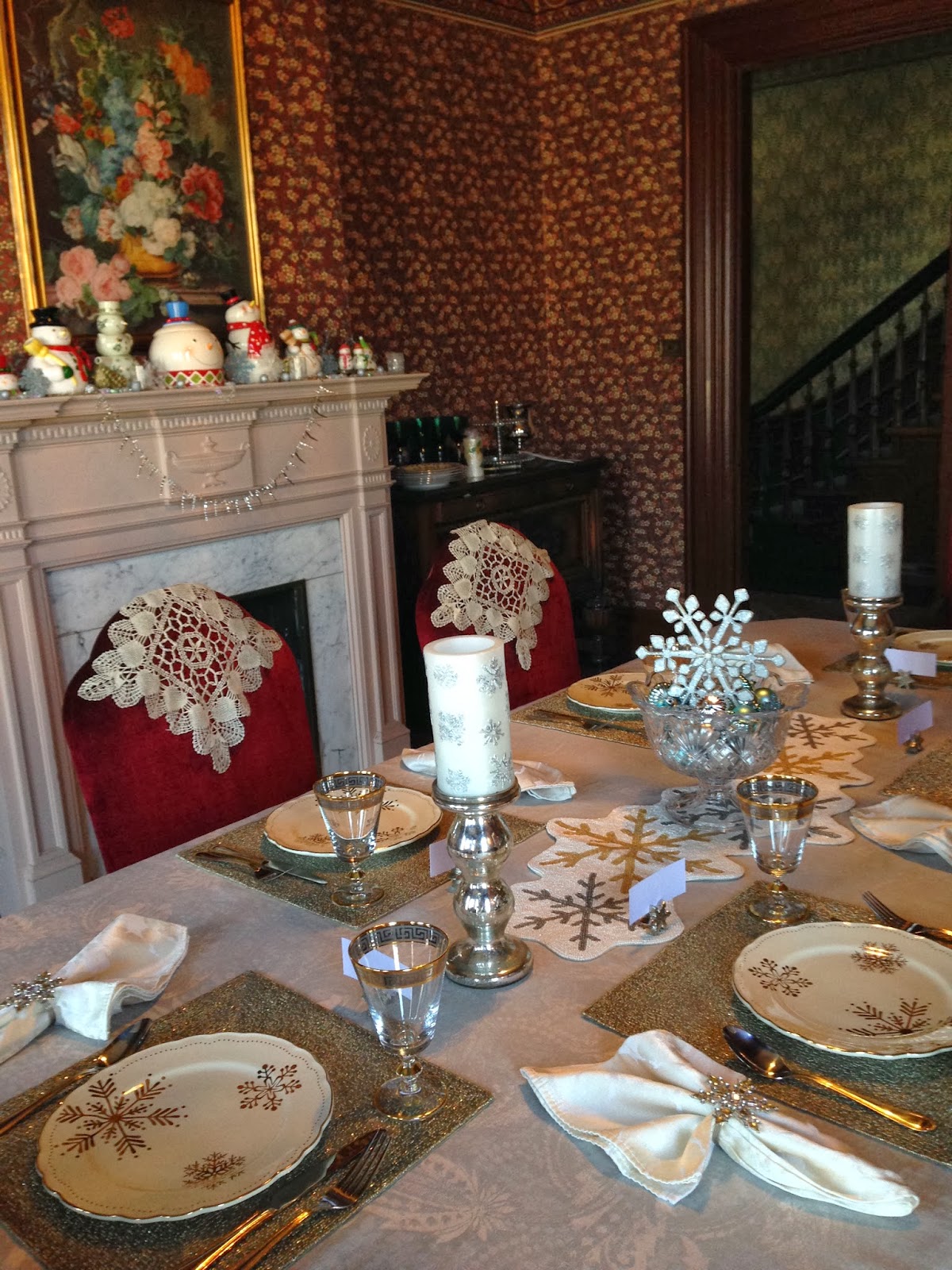 I will be joining Susan at Between Naps on the Porch. Stay warm!

I can't believe that I started this blog five years ago today. I don't really know why I started it. I didn't imagine that anyone would find it interesting. I had never heard of Tablescape Tuesday (now Tablescape Thursday). I had been active in a Table Settings forum on a recipe site and thought it would be nice to have a way to save my tablescape pictures. Right after I published this first entry, I received two comments - then a third comment from Susan at Between Naps on the Porch inviting me to link up at her site. Through her site I have "met" many talented and kind bloggers. I will link this post to her Tablescape Thursday.

I have found that I am a very bad blogger. I get busy with work and family and don't get to post on my on blog or visit my friends' blogs. That being said, I am truly grateful for the friendships I have made with blogging and how tolerant these friends are of my lapses! Anyway, I have rambled on enough - here's to the last five years of blogging and many, many more in the future! Thank you! Jewel

I have decided to use this blog to catalog my table settings. The first table of the year is Winter Wonderland: Barely Blue.

I didn't want all the sparkle to go away after I put up the Christmas decorations, so I decided that I would create a Winter Wonderland of ice and snow. I spay painted limbs silver and used icicle and snowflake ornaments as well as strung acrylic "jewels" in "Barely Blue" shades. I used Tiffany Blue tulle as a table runner over a slightly off-white table cloth and tulle on the mantle. I put blue "marbles" and clear acrylic pieces that look like cracked ice in a vase to hold the limbs.

I put the vase in the center of a silver wreath from Target and filled in the gap between the wreath and the vase with silver and blue Christmas ornaments.

On the mantle, I put limbs in a blue round vase and made a bow from blue and silver sheer ribbon. I hung jewels, icicles and ornaments in silver and blue on the limbs.

Beside the vase I put silver limbs and golden ferns from Target and silver poinsettias and wired pearls from Michaels. At the ends, I used silver mercury glass candle pillars with white fake candles embossed with silver snowflakes.

In the small white vases, I had small silver spray painted limbs with 3 silver ball ornaments.

On the table, I had mercury glass votive holders from Target in silver and icy green/blue, as well as two different types of clear snowflake holders. I also used small blue vases with white silk flower sprays. I also scattered acrylic jewels on the tulle.

At Cracker Barrel a few days after Christmas, I found these plates for 70% off. I originally thought my table would only have blue, silver and white, but these plates in ivory and gold were such a good deal I couldn't pass them up. The gold allowed me to use gold napkins and glassware with both gold and silver embellishment and I used gold and silver chargers. I also found ribbon with golden snowflakes at Michaels for 70% off which I tied for napkin rings.

Before I found the ribbon, I used silver napkin rings

I will host my garden club on January 20th and use the table as a buffet. I am making cupcakes with fondant snowflakes. I have improvised a cupcake holder/tea tray with two platters and a cake stand from the 70% off Cracker Barrel sale, a flat topped glass bowl and a battery operated tea light.

Comments and suggestions are welcomed! My table and this blog are a work in progress!

Posted by Jewel Sauls at 8:53 AM No comments: