In honor of The Duke and Duchess of  Cambridge's 3rd Anniversary, I am sharing the table my daughter Emily and I did in honor of their wedding. I will be sharing it on Between Naps on the Porch for Tablescape Thursday.

Since we couldn't find a sapphire blue tablecloth, we started with a white tablecloth and used blue fabric to make a runner. Then we added red and white ribbons to form a Union Jack design. For the centerpiece, we pulled out the "crown jewels" and put them in an apothecary jar which we topped with a tiara.

Then we surrounded the jar with various British and Royal Wedding symbols.

For each place setting, we used a red place mat with a golden charger topped with a Spode Blue Italian (which is really very British) dinner plate. I used Oneida Wordsworth flatware and three different types of stemware.

On each white napkin with a gold napkin ring, I put a Royal Wedding pin. There are several different styles.

Here is the whole table.

Happy Anniversary William and Kate!
Posted by Jewel Sauls at 9:54 AM No comments:

When I started blogging in 2009, I didn't have any blue and white china. I drooled over my blogging friends blue and white dishes for a year until I couldn't stand it! For my birthday in 2010, I started collecting Spode Blue Italian. 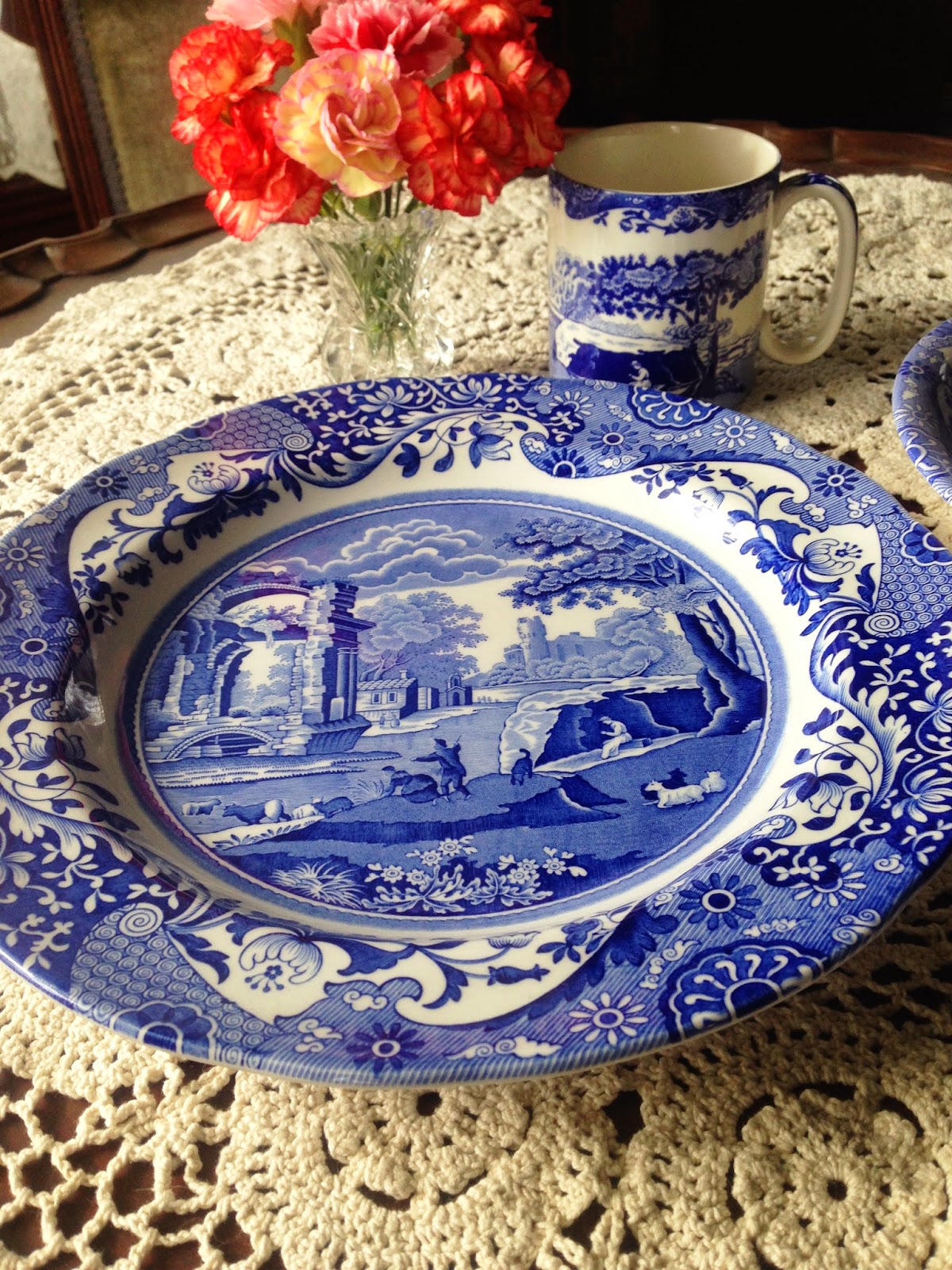 The Italian Pattern was introduced by Spode in 1816 and was an immediate success. It has remained popular for almost 200 years! The scene in the middle is a bit of a mystery, but it definitely has classical origins. The border has a Chinese influence. 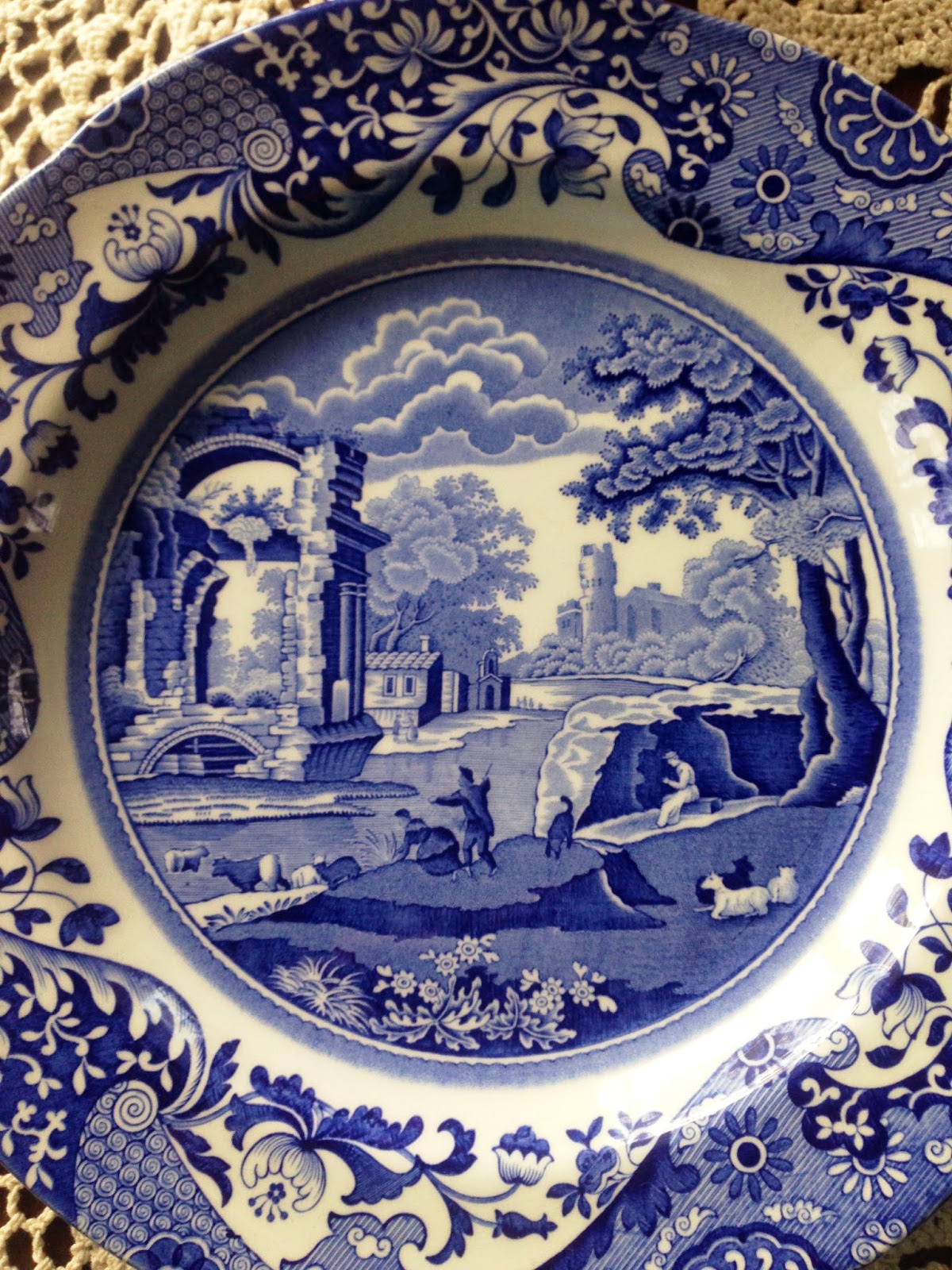 I found a wonderful offer for 4 dinner plates, 4 salad plates and 4 mugs when I started this pattern. 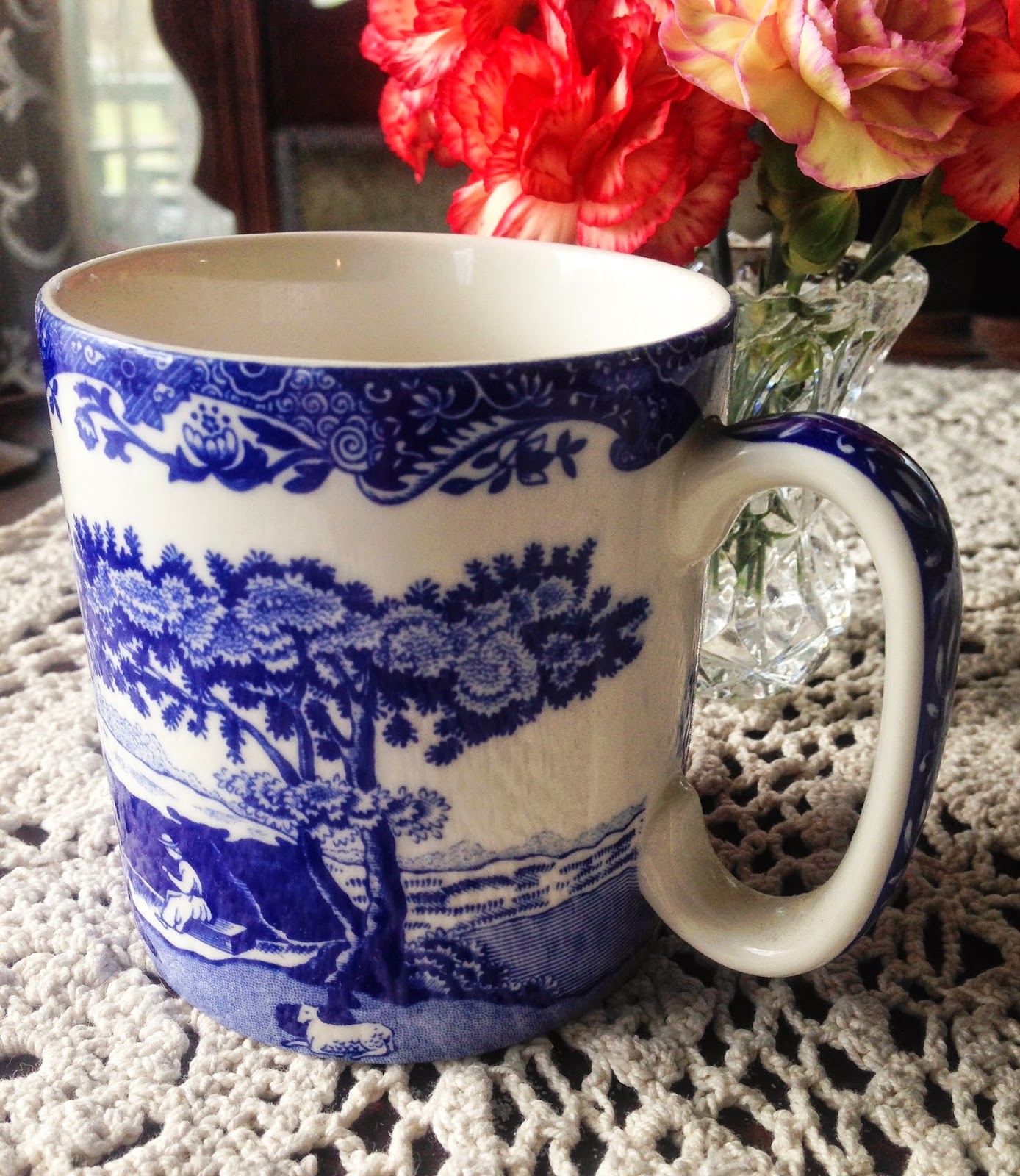 Then I started getting bowls next. 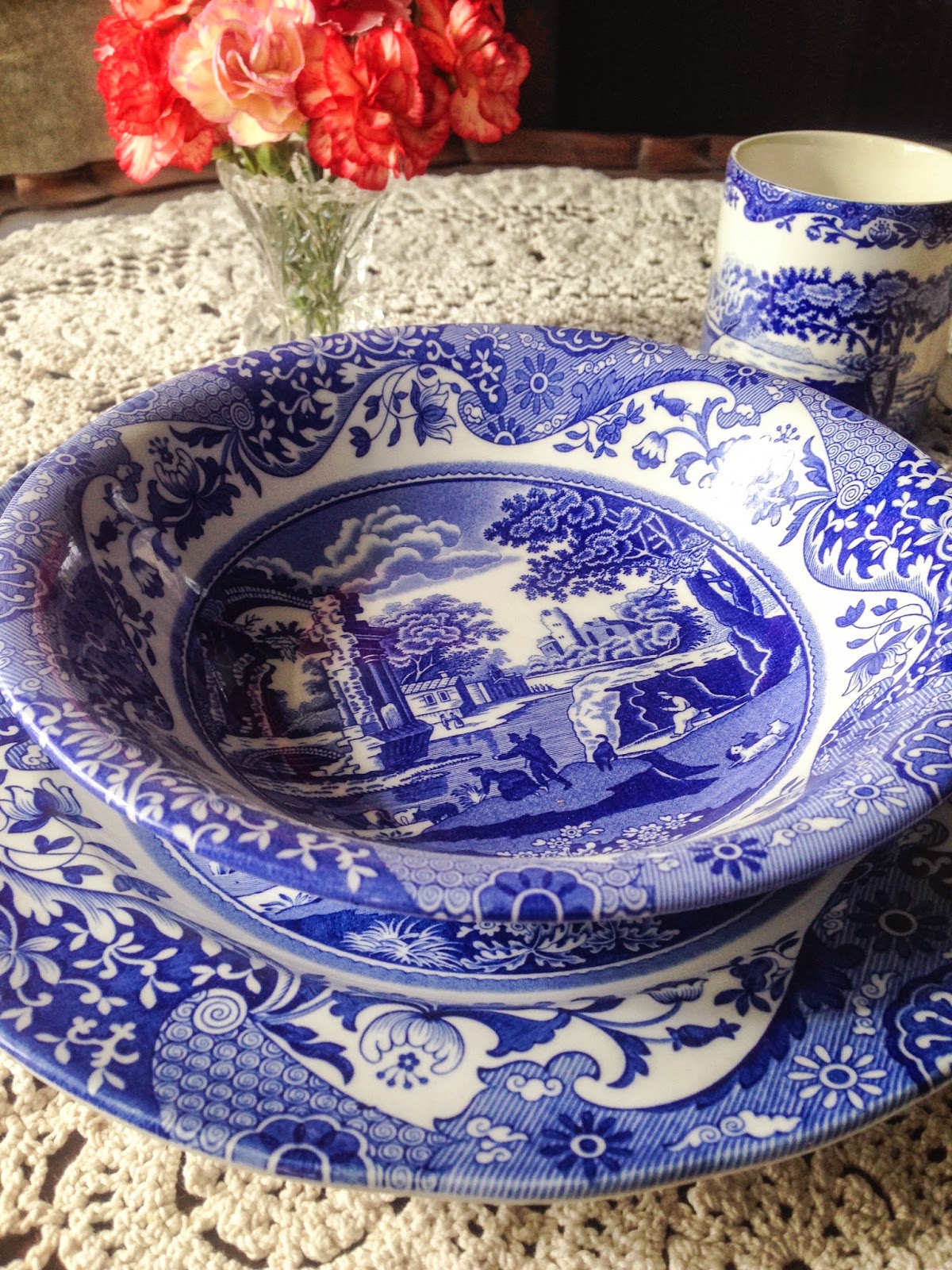 I want to get the tea cups and saucers next - and of course the tea pot!

I love the historical look and the easy care/microwave-safe properties! 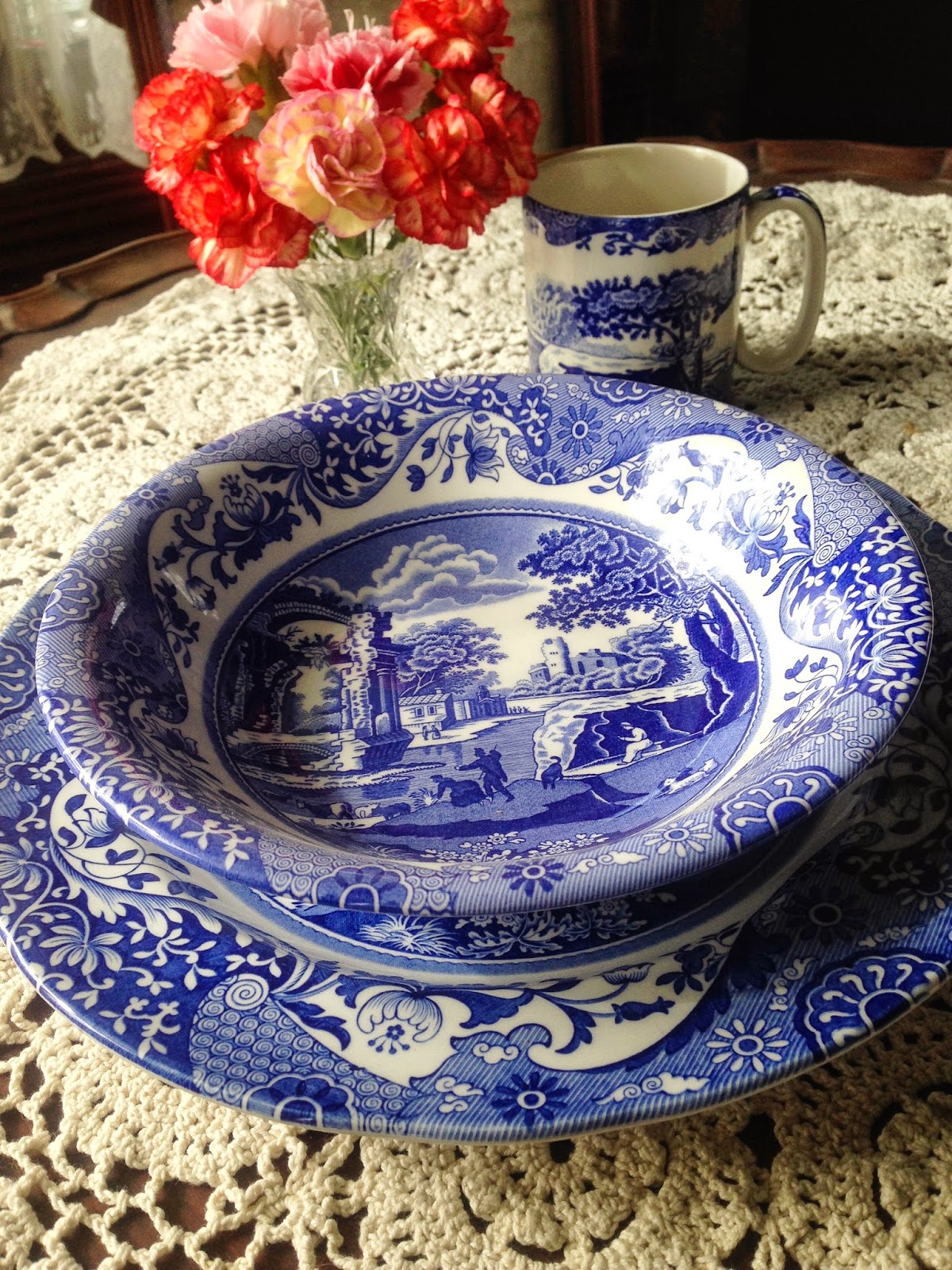 I've combined this with my Spode Tower Pink for a Patriotic Look HERE.

And it got the ROYAL (wedding) treatment HERE.

And it even looks good in autumn HERE!

I will be joining Tablescape Thursday at Between Naps on the Porch.

Last week I mentioned that I already had a full service for 12 of Formal China before I got married. You can see that china HERE. So when I got engaged, my mother and I went to Wagoner's Jewelry Store to pick my patterns. She told me not to pick another formal pattern, but just pick a nice everyday pattern. I chose Royal Worcester Evesham and my fiancé approved.

Royal Worcester introduced the Evesham pattern in 1961. My mother started getting pieces of this in the late 60's/early 70's, so it was a pattern I was very familiar with. The pieces are covered with fruits and vegetables, and it is named after a town and township in central England which is known for market farming. 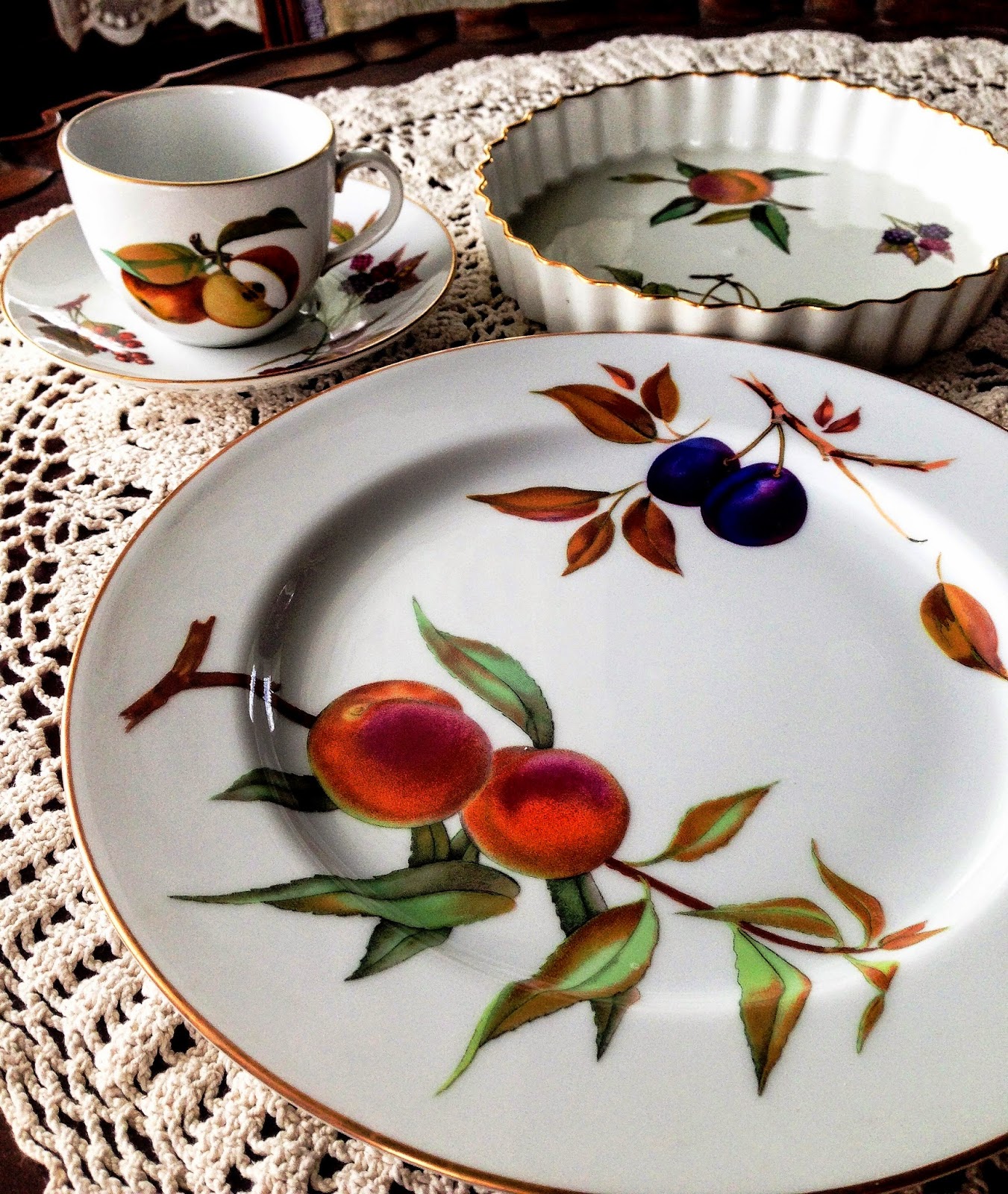 In 1982, I thought this would be a great everyday pattern - pretty, but not too fussy or fancy. But, notice the gold rim? I had no idea what was about to hit kitchens all over America!

And as we all know, you can't microwave plates or mugs with gold on them! Once I got a microwave, I used plastic or glass dishes to microwave on and put the food on the Evesham plates. My girls grew up knowing these rules and we never had a problem.
Royal Worcester introduced a new type of Evesham called Evesham Vale which had a green, mircrowave-safe rim. So, the Evesham I had was renamed Evesham Gold.

One of the things I have always loved about this pattern is that it was available on lots of serving pieces. And since I was from a small town and had a big wedding I got LOTS of serving pieces which have graced my corner cabinets through the years!

Here is a picture of several serving pieces on my buffet. Notice the ears of corn on the Bean Pot. 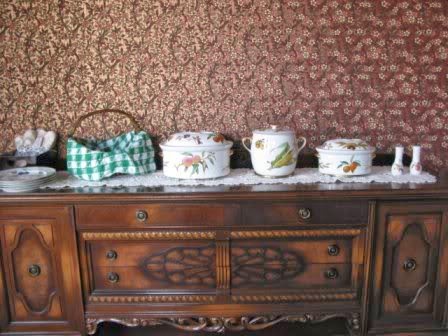 And here is the smaller quiche dish 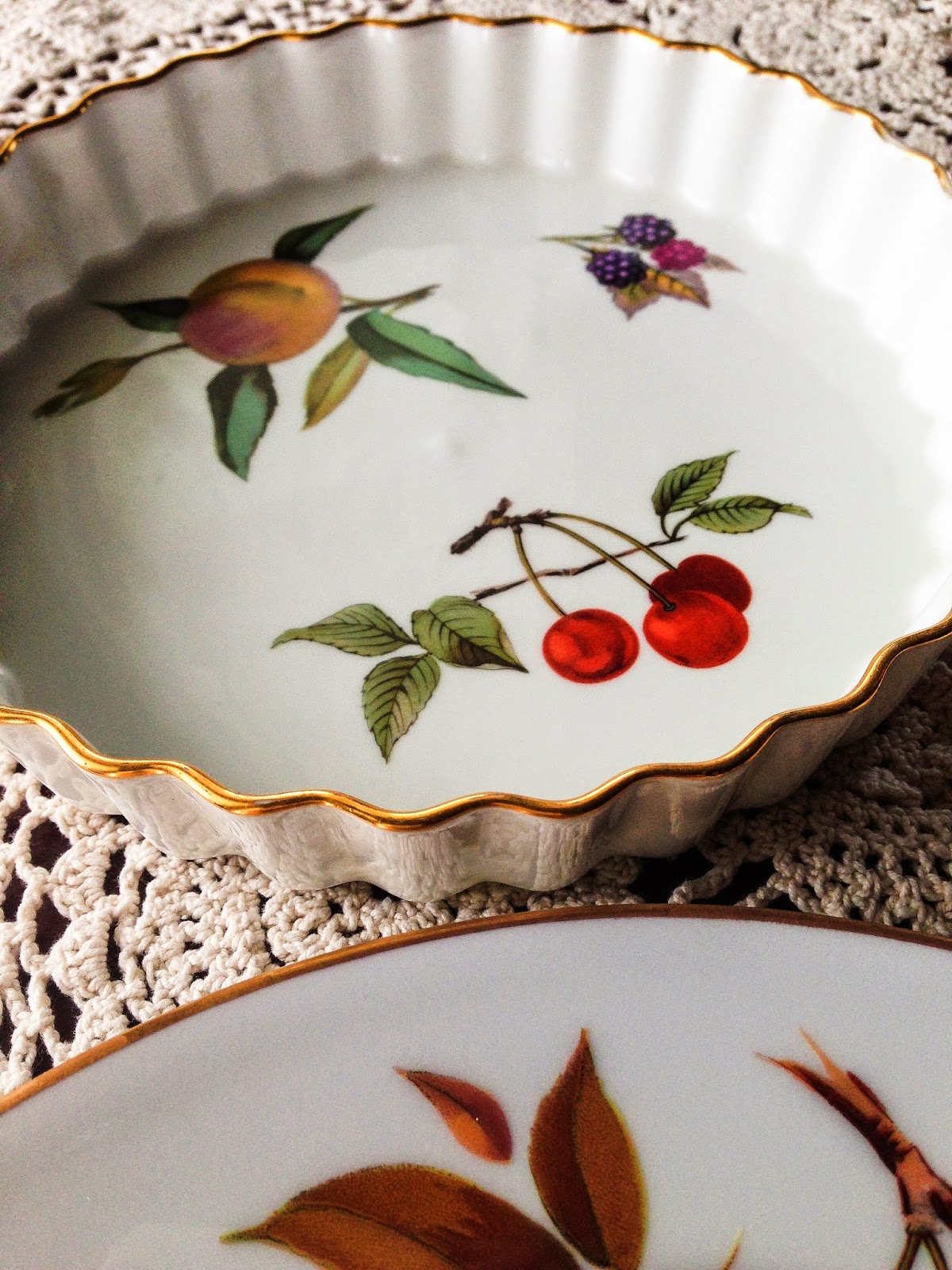 I love that each piece has a different combination of fruits and vegetables. 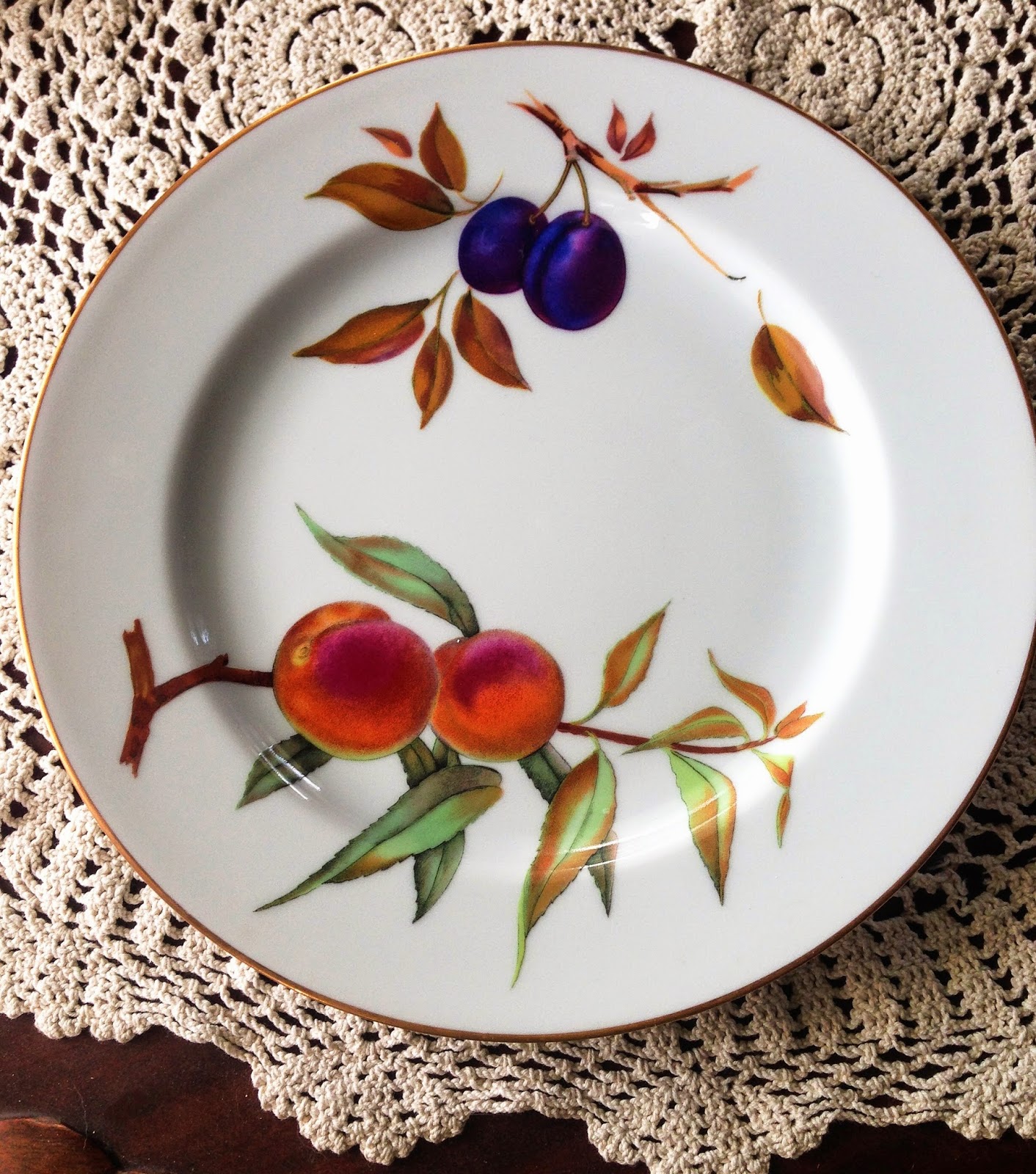 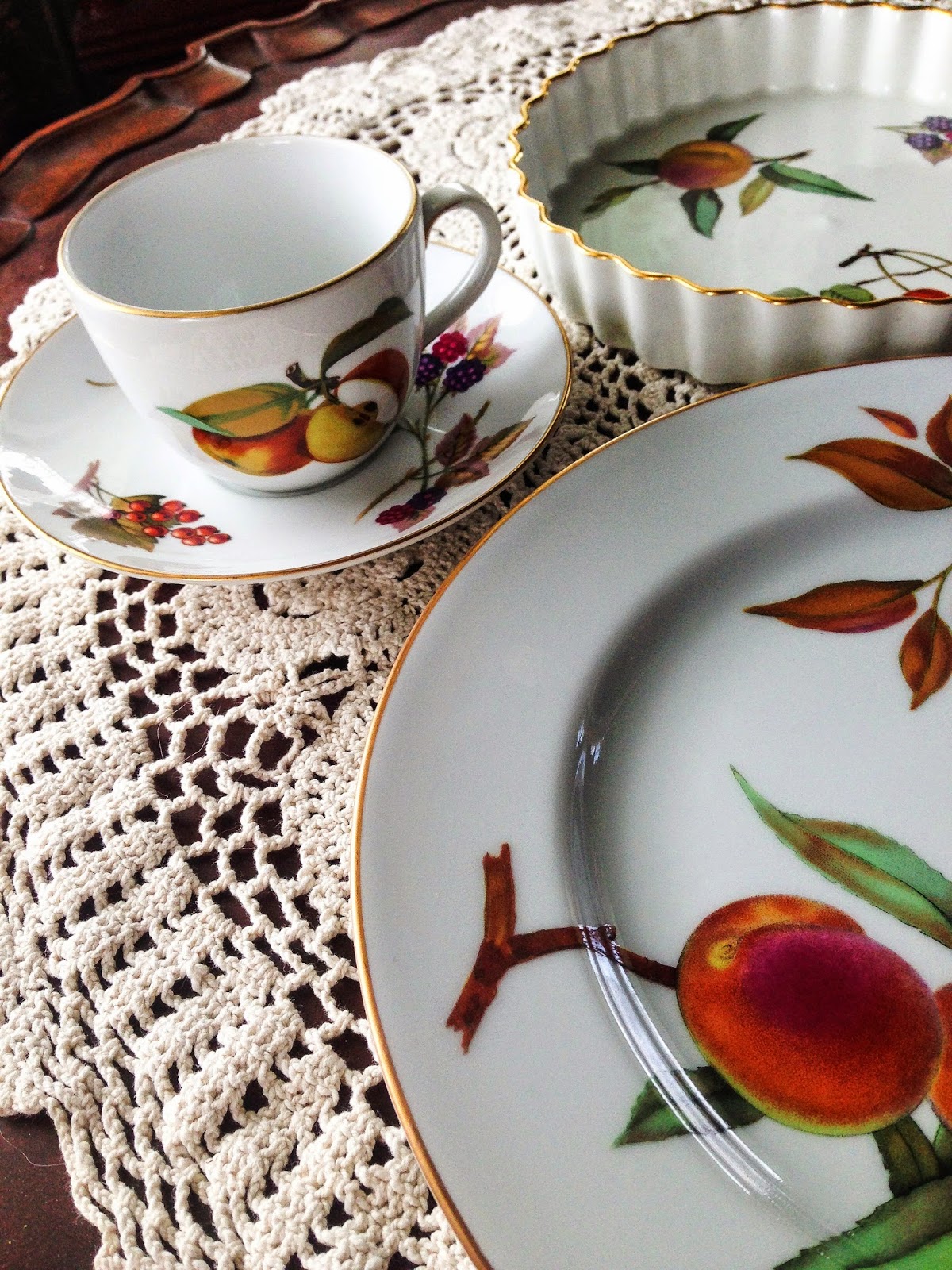 After 20 years of marriage, I picked a new microwave-safe everyday pattern, Pink Tower, which I blogged about HERE. But my older daughter tells me it always makes her happy to eat on Evesham since it reminds her of her childhood!

I will be linking to Tablescape Thursday at Between Naps on the Porch.

Posted by Jewel Sauls at 3:38 PM No comments: